MAP12: The Zealous Machine is the twelfth map of Sunder. It was designed by Insane_Gazebo and uses the music track "Europa Mining Colony," from Descent. 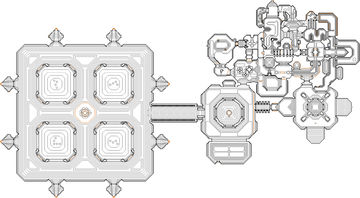 Map of The Zealous Machine
Letters in italics refer to marked spots on the map. Sector, thing, and linedef numbers in boldface are secrets which count toward the end-of-level tally.

The super shotgun and plasma gun are available at the start, along with a megasphere. Two arch-viles and a group of revenants serve as your first challenge, with a cyberdemon to the northwest who is guarding a megaarmor. Take the winding passage with revenants to a switch and use it, then take the route west of the starting point. There will be barons of Hell, Hell knights, an arch-vile on a wall, and four mancubi to deal with. Past the mancubi, turn east to find the rocket launcher, then go west. Three arch-viles will come from a wall behind you. Also take note that the sludge to the south of there does not have an escape route. Keep going west to a lift, and you will notice some steps to the north. If you take them, you will find two cyberdemons and some Hell knights, plus chaingunners on the east wall.

Either take the lift up, or go up the north steps and the ones leading west. Whichever way you choose, the walls to the north will lower, with cacodemons coming out from them. A wall east of where the chaingunners were will have revenants attacking you. Take the steps at the north end to reach the area where the cacodemons came from and press the switch in the back, then head back west. If you have not killed it already, there will be a lone arch-vile here and two paths. The south path is blocked off, but the switch you pressed earlier has opened the west path.

There are two sludge pits you should avoid in this next area, the one to the south, and the one in the center. This sludge pit will contain six pain elementals, which should be dealt with quickly. As you enter, a group of revenants will appear near the west wall while a cyberdemon is to the south. Climb up the southwest steps to where the cyberdemon is, doing so will cause imps to teleport to two locations behind you, so deal with them as well. The switch on the cyberdemon platform will allow you to leave and reach the south path this time. Drop to the megasphere and prepare to fight Hell knights, a cyberdemon, and two revenants.

The next thing you need to do is build a bridge to the east. First off, go a bit south, but do not turn the corner yet. A wall behind you should open up with revenants and three arch-viles coming out. Once you get rid of them, go around the corner and get rid of two cyberdemons, then continue to the switch. The switch raises the bridge, but also opens a big wall nearby with Hell knights and cacodemons. You will also catch the attention of two cacodemons and another cyberdemon on the other side of the bridge, which you probably have to snipe in order to get rid of.

Cross the bridge and use the lift when done. Take note of the wall with yellow skulls around it and move on. The next area will have barons of Hell in it, as well as a switch to the southwest which you will have to remember for later, as it is locked at the moment. To the east is a horde of pain elementals and a soul sphere. Go that way and take the steps to the north, ignoring the next set of steps and going to the BFG9000 and megasphere. You will find the yellow key with lots of ammo when you turn west. A huge horde of imps will teleport in at numerous locations after you pick up the key, including several areas you have been to that are now accessible from multiple directions. Return to the switch from before and use it, then take the steps you ignored before. At the top, you will fight four arch-viles in this hall. Go all the way to the end of the hall and use the yellow key switch, which will open the wall with yellow skulls from before as well as two walls with cacodemons along the path back.

Past the wall with yellow skulls is a seemingly empty area. Pressing the switch at the south end opens up the middle building with four cyberdemons inside, as well as the three walls at the west, east, and south ends. The east and south walls reveal hordes of imps, while the west wall reveals Hell knights. Fend off the cyberdemons, as you will need to press four switches inside the building to open up the door westward. Each switch after the first will take a little while before it becomes available, so do your thing and kill enemies while they lower. When done, continue westward.

This arena is much bigger than the last, and as soon as you drop in, revenants will attack. Try to circle the perimeter of the arena to get most of them in the middle, and keep moving to avoid their firepower. When ready, press the switch past the megaarmor. The north and south walls will open. The north wall reveals five cyberdemons, while the massive south wall will reveal Hell knights, barons of Hell, and cacodemons. If you can, lure the monsters into infighting to even things out. When done, the switch is to the south. You should have about half of the enemies dead at this point. You will soon enter the largest arena and the final challenge of the map.

Scan the arena before heading into the center. There will be eight soul spheres on the outer perimeter, two in each corner, along with the ammo you need. The eight alcoves on the outer sides will be where all the monsters will teleport from. The four inner chambers in this arena have lava pits in them, which you cannot escape from if you fall in. There are blood platforms leading to pickups over these lava pits: two invulnerabilities and two soul spheres. When you press the switch in the center, the monsters will come in. The majority of the monsters will be Hell knights, revenants, and cacodemons, but you will also contend with no less than twelve cyberdemons. Try to use the invulnerabilities and soul spheres wisely, and keep monster infighting going as much as possible. In order to exit, go to the west wall and into the southern alcove, finding a switch on the south wall here. Then go to the alcove directly to the north and use that switch. The last switch will be to the northeast, which has the exit signs around it. The exit itself is in the middle, and four arch-viles will make it much harder to reach the exit safely.

* The vertex count without the effect of node building is 11796.