MAP12: Un-Employed is the twelfth map of Running Late 2. It was designed by A2Rob and uses the music track "". 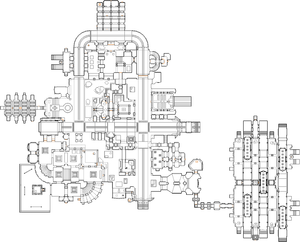 Map of Un-Employed
Letters in italics refer to marked spots on the map. Sector, thing, and linedef numbers in boldface are secrets which count toward the end-of-level tally.

In Secret #2, go to the southeast side and lower the east wall, then another wall east of it. Head south to the dead end, then carefully inch on the south wall, hugging it as you head along the wall east, then south. From the end there, jump to the blue key. This is a shortcut allowing you to access that area before you finish the southwest side of the map.

* The vertex count without the effect of node building is 11333.