MAP12: Underground Initiations is the twelfth level of the first episode of Back to Saturn X. It was designed by Travers Dunne and Paul DeBruyne (skillsaw), and uses the music track "Liquid Luck" by James Paddock. The par time is 7:00. In the official add-on version, this level's name is Subterranean Searcher.

The map is divided into several sections, containing a keycard each, which can be tackled in any order; all three keycards are then used to access the final area. 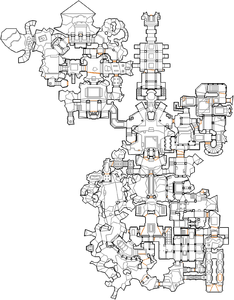 Map of Underground Initiations
Letters in italics refer to marked spots on the map. Sector, thing, and linedef numbers in boldface are secrets which count toward the end-of-level tally.

Press the button in front of you to be taken up to an outdoor storage area at the center of the map; there is a shotgun on your right if you need it. Go up the steps in front of you and turn right at the top, then head straight forward to a door and open it to confront a zombieman and shotgun guy. Go through the brightly-lit doorway straight ahead and climb some steps to a ledge with a mancubus then walk east to a hole opposite a red key door; drop down the hole and kill the imps and zombies on your right, then head north past a stack of crates with the blue keycard to a doorway and turn right to see a staircase with a Hell knight (and mancubus on Ultra-Violence (UV) and Nightmare (NM) skill levels) at the top. Turn right at the top of the stairs to find a super shotgun then turn right again and kill a mancubus blocking your path before dropping down to the blue key.

Taking the blue key will seal the entrance to the room and open a chamber behind you containing a spiderdemon; on Hurt Me Plenty (HMP) or higher you will also face one or two arachnotrons that are released ahead. Enter the spiderdemon's chamber (which holds a plasma gun) and press the "LOCK" panel on the back wall to re-open the entrance, then go through it and climb the curved staircase ahead and to your left to find a blue key door; open it and kill some waiting chaingunners before returning to the starting point.

Return to the center area and go through the doorway on the west side to enter a curved tunnel, then follow it until you see some imps and zombies ahead - the red keycard is on a ledge to your left. Drop to the floor below where an arachnotron and mancubus are waiting, then head due north to a lava pool and step through it to a small island in the center; a wall on your left will lower to reveal one or more revenants, but you should run east to the radiation shielding suit on the neighboring island first. Step past the wall then follow the lava west and north until you reach dry land, kill some waiting enemies then walk east up some steps to a corridor guarded by a few zombies. Go to the end of the corridor and turn right then right again, kill three chaingunners that rise from the floor ahead (on HMP or higher) then flip the switch on the north wall - this will lower the ledge holding the red key, but you will have to contend with a crowd of enemies that teleport in to defend it on the way back (including an arch-vile on UV and NM).

In the starting area, next to the entrance to the red key area are some steps - climb them and flip the switch ahead, which will lower the floor in front of the starting point, then drop down this hole to confront some imps guarding a pair of doors. Open either door and kill any imps and demons waiting behind them, then enter the next room and dispose of one or two barons of Hell that rise from the floor ahead before leaving the room by the south-west exit. Follow the passage down some steps until you get to some crates, watching out for cacodemons that are released behind you, then continue following the path south past a variety of enemies until you reach a radiation suit next to a nukage pool. Take the suit, enter the nukage and walk east over a stone step, then head north to a lift that will allow you to climb out of the pool. Once the lift reaches the top, turn left and kill some approaching shotgun guys and imps (plus an arch-vile on UV and NM), then head through the north doorway to find a "LOCK" panel which will open the red bars opposite it. Step past the bars and fight off the mancubi that appear in the middle of the room, then leave by the east doorway.

Head down some steps to a hallway between two high ledges and follow it to a T-junction, then turn left (north) and follow the path to a room with imps and chaingunners - avoid charging in as mancubi will be released behind you when you enter the room. Open the door at the north end of the room and kill an arachnotron waiting ahead, then go through the doorway next to it and press the button on the wall ahead to lower a nearby lift with a mancubus. Ride the lift up and walk south to some steps, climb them then go round the corner to reach a ledge with some yellow floor strips - if you straferun from these strips you can leap across the gap and land on another ledge just below. Follow this ledge west and north until you reach a mancubus, then push past it to get to the yellow key.

To leave this area, backtrack to the lift that led up to the ledge with yellow lights, ride it up and walk north up some steps to a plasma gun. Fight your way past another arachnotron and some smaller enemies, climb up two more sets of steps then head through the next room to a door; it will not open when pressed, but if you turn left and left again you will come to a ledge overlooking a nukage pool. Press the button on the last pillar to open the door, fight some imps and zombies that are released (along with an arch-vile on HMP) or higher then go through the door and activate the lift directly ahead to go back to the blue key area.

With all three keys, return to the starting area and head due north past the circular column in this area; you will find steps leading down to a chamber with three colored "LOCK" panels. Press the panels to open the doors on either side of the chamber and go through to a room with a button, press it to activate the nearby lift and ride this down to a seemingly empty room. Ready yourself before stepping off the lift, as six compartments containing imps and mancubi will open on either side, along with a compartment ahead with an arachnotron, demons and three barons (or a cyberdemon on HMP or higher). Fight your way to the north end of the room and flip the switch here to end the level.

There are several locked doors placed throughout the map that provide shortcuts, provided you grab the keys in a particular order.

Six evil eyes (Things 874, 880, 892, 893, 894 and 896) have no flags set for any of the three difficulty classes, so they do not actually appear in the level. Travers added them to the map to flag areas of possible visplane overflow visually in the map editor.

* The vertex count without the effect of node building is 6857.