MAP12: Vinyl Resting Place is the second secret map of Threshold of Pain, accessed from MAP11: Frantic. It was designed by John Gourley (scalliano) and uses the music track "Lamentation," composed by Aubrey Hodges for the Sony PlayStation port of Doom. The par time defined in MAPINFO is 5:00. 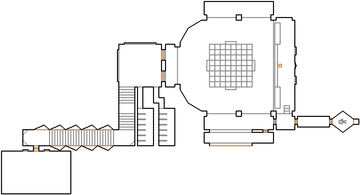 Map of Vinyl Resting Place
Letters in italics refer to marked spots on the map. Sector numbers in boldface are secrets which count toward the end-of-level tally.

Head forward between the candles and go through the door in front of you, then turn right and follow the staircase to the bottom. Turn right and kill the two Lords of Heresy on guard, then go through either of the doorways in the south wall to enter a bathroom area. Both bathrooms contain a backpack and large ammo pickups; the west bathroom also contains weapons and a megasphere, while the east bathroom contains a red skull key.

Once you have all the items, go through either of the east doors (with red skull markings) to find a dance floor full of zombies, including several that are armed with plasma guns and Unmakers - club music will also start playing. Due to the number of zombies present, it may be easier to hide behind the door supports and let the zombies infight each other. Once all the zombies have been killed, a purple marine called JG will teleport on to the dance floor, who also fights with an Unmaker but can also fire railgun-like shots. Use cover whenever possible as his shots are highly accurate; alternatively, you can get close and fill JG with plasma rounds, as his high pain chance should prevent him from fighting back.

After JG dies, a large monstrosity called "Cyber JG" will appear on the dance floor - resembling a purple version of the Cycloid Emperor from Duke Nukem 3D, it fires streams of plasma rounds, purple fireballs and bombs that explode and spray projectiles in all directions. Keep strafing and you should be able to clear the fight without taking damage. Once Cyber JG is destroyed, a wooden door in the south-east corner of the room will open - go through it and head east through two more doors to a teleporter leading to MAP03: Recycling Plant.

An armor and a berserk pack can be found behind the pillars in the north area of the dance floor.

A shotgun and a box of shells can be found behind the bar south of the dance floor, along with a large number of health bonuses.

* The vertex count without the effect of node building is 529.