MAP12: Walk in the Park is the twelfth map of Scythe. It was designed by Erik Alm, and uses the briefing music track from Descent. 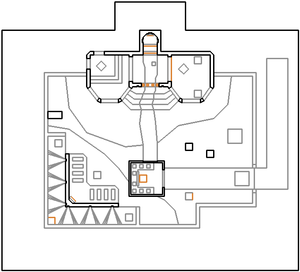 Map of Walk in the Park
Letters in italics refer to marked spots on the map. Sector numbers in boldface are secrets which count toward the end-of-level tally.

Just behind the crate to your right is a shotgun, so grab it and head west to find the red skull key. Now open the red doors into the field and you can take either of the other two keys in whatever order you like. The blue skull key is inside of the red brick building with the two barons of Hell inside, while to get the yellow key, you need to go behind the brown brick wall in the southwest (the one that has rockets and a switch which lowers a rocket launcher) and head through the nukage to get it. Once you have both keys, return to the building you started in and open both the yellow and blue doors to find the exit.

* The vertex count without the effect of node building is 481.