MAP12: Wrong Address is the twelfth map of 3 heures d'agonie 2. It was designed by Memfis and uses the second music track from Al Unser Jr. Arcade Racing, originally composed by Frédéric Motte. 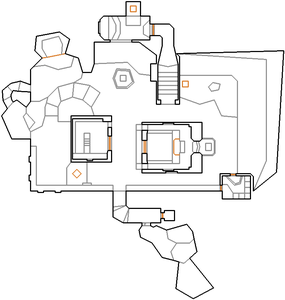 Map of Wrong Address
Letters in italics refer to marked spots on the map. Sector, thing, and linedef numbers in boldface are secrets which count toward the end-of-level tally.

A spectre (Thing 172), one of the four near the fountain in the central courtyard, has no flags set for any of the three difficulty classes, so it does not actually appear in the level.