MAP13: Asylum is the thirteenth level of Icarus: Alien Vanguard, set in a simulation consisting largely of similar-looking grey-paneled rooms. It was designed by Robert Taylor. 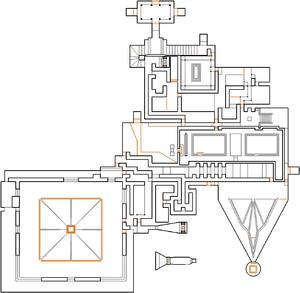 Map of Asylum
Letters in italics refer to marked spots on the map. Sector, thing, and linedef numbers in boldface are secrets which count toward the end-of-level tally.

From your starting point, you will see the red skull key on a ledge, and, like all the levels in this megawad, it is the key for the exit. Grab the super shotgun and turn left. Go all the way down the green hallway until you reach the wall with blue triangles. Open this wall and take the left (east) corridor until you see a window to the right. Press on the wall opposite of the window to open it. In this area, just head north all the way until you spot a wall in the northwest corner with a symbol on it. Press this wall to open the way to an examination room with a chainsaw in the middle and demons on the back wall. Head right from this room and open the next wall with a symbol on it to find a staircase. At the end of this staircase you will get the red skull key. You can then jump back to the starting room and then go back down the corridor and open the wall again. This time, go west into an open room. Open the southwestern wall and then open the nearby wall with the insignia on it. Then open the wall to the left in there. At the fork, go right, and near the cage, you will see a wall with red markings around it. Head through this wall and teleport to the exit room.

Turn left from the start and head into the gray area. There is an army of imps (plus one shotgun guy) in here. If you go to where they were positioned, you will trigger a lift to the north. Inside, are some Hell knights, barons of Hell, and a megasphere. If you press on the eastern wall that has the symbol on it, you will open it to reveal the inside of a cage with an energy cell pack and a plasma gun.

Grab the supercharge in the area with the cages to the northeast (it is on the way to the red key). There is a linedef slightly west of it which opens several blocks. Trigger it then head due south of where the soul sphere is, through the cage to the right of the path that has boxes of shells. Approach the end of this cage and the wall will open revealing a megaarmor.

When you get close to the red key, a door will open. Backtrack a bit to find the northern wall has opened up. Inside are an arachnotron and some demons. Grabbing the armor in the back triggers walls to open with Hell knights inside.

The southwest part of the map has a rocket launcher in the center. There are imps in the hallway surrounding this area. Find a way to the interior of this area and to get the rocket launcher, press any of the walls to open the room with the gun. Be careful of the arch-vile and mancubi, and watch out because when you pick up the weapon as all of the walls will lower.

In the open area that holds the backpack, press on the wall with the blue triangles behind the backpack to find a prison-like area. There are several monsters in the three cages, including zombiemen, demons, and a baron of Hell. If you approach the middle cell from the step, you can crush the demons in the middle cell. To reach the pickups in the other cells, you must run across the first step to the middle cell toward the southeast corner of the western cell from such a location and angle that you graze the second step enough to lift you up. (You may need to practice until you get it right.) From there, head around the east end until you reach a misaligned section of the cell bars; this section can be walked through. Once inside, you may collect a box of shells and a supercharge. Approach the silver barrier and it will sink into the floor—along with the barrier blocking the eastern cell. Inside that cell, you can pick up 16 armor bonuses, a stimpack and a box of shells.

* The vertex count without the effect of node building is 1502.