MAP13: Catacombs is a level in Strife. It uses the music track "Castle".

Macil has sent the player to shut down the system that turns peasants into acolytes. After meeting Richter in the commons, the player enters the catacombs to find a key that would give access to the factory where the system is located. In the catacombs, the player will eventually reach the ruined temple and find the key there. After that, he would access the mines and the factory.

The catacombs appear to serve as an underground hub between some of the core locations of the Order. Once the player has entered the catacombs from the Order commons, he is able to open a route to the bailey of the Bishop's fortress down there. In addition, the underground locale has two sealed entrances that can be opened later from the factory. The passages behind them lead to the conversion chapel and the manufacturing. 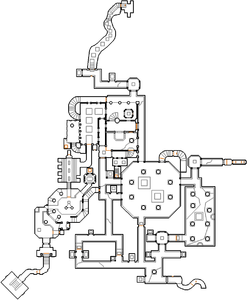 Map of Catacombs
Letters in italics refer to marked spots on the map. Sector, thing, and linedef numbers in boldface are secrets.

Head down the staircase into a large octagonal room. Turn right and right again into a passage - follow the passage past two windows and head into a doorway on the left. Approach the doorway guarded by an acolyte and go through it, then jump through the window ahead to land on a square platform below. Turn left and look down to see a small room below with two medical kits and a switch - drop down and throw this switch to raise another platform nearby.

Turn round and walk round the platform you just raised, then turn right and head up the staircase ahead. Follow the passage and head through a small metal frame (BlackBird will comment about being lost at this point). Turn right and drop off the ledge into a water pool, then turn right again and follow the raised platforms ahead into a tunnel. Follow the tunnel to a set of steps leading to a stream, then turn left and head into a room with torches in the center. Head around the torches to see a chamber with four metal pillars, then throw the switch behind these pillars to lower the water.

Turn round and jump over the wall ahead to land in the lowered water. Turn left and head through the doorway, then climb up the stairs to reach the ruined temple.

Back to the commons[edit]

After returning from the temple with the mine and factory keys, head back down the steps and follow the water to a small tunnel leading to a teleporter. Step into this then drop off the ledge, arriving in a room west of the area with the raised platforms. Squeeze between the square pillars and drop to the floor below, then turn left and head up the curved staircase you used earlier. Follow the tunnel ahead all the way to the wall, then turn right and follow the passage to get back to the large octagonal room. Turn left and then left again to find the staircase back to the commons.

To the north-west of the octagonal starting area, there is a room where a mini-missile launcher can be found. When you enter the staircase that leads to the room, you will temporarily open a door to the south of the weapon. Enter the chamber beyond the door and use the teleporter to reach a nearby station that holds a surgery kit.

Apart from the ruined temple, this level connects with hidden passages in three Order-controlled areas:

* The vertex count without the effect of node building is 2473.