MAP13: Dark Citadel is the thirteenth level of Doom 64, designed by Tim Heydelaar. It uses the music track "Voices In The Blood". Not the toughest level, but one that can make you jump more so than others. You will find yourself getting randomly ambushed by demons, Hell knights, and barons throughout the level. This stage uses the starry skyline from the earlier 7 stages.

Boxes of shells and bullets are plentiful, so do not hesitate to make use of them. Be prepared though, as there are lots of enemies in various locations. 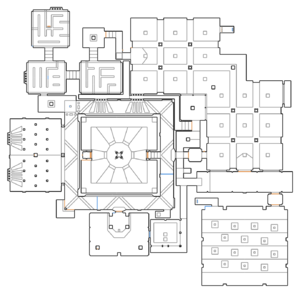 Map of Dark Citadel
Letters in italics refer to marked spots on the map. Sector and Thing numbers in boldface are secrets which count toward the end-of-level tally.

The player begins inside a niche with an inoperative teleporter. Go out into the hallway and turn left and follow it while killing pinkies and barons along the way. Then turn right and hunt down all the spectres and Hell knights before exploring the area with all the wooden posts. Activate the switch on the center wooden post, then go back down the hallway towards the start of the map, turn left, and enter the room with the shotgun on the pedestal. Picking up the shotgun will cause the walls to instantly drop and you'll have to face off against a pair of barons and an arachnotron. Defeat them to open the door back to the hallway. Press the switch on the far column in the corner to open the door to the next room over. You will see an armor pickup in the middle of the floor, but approach carefully because the floor will open up to reveal a radiation pit and the armor pickup will be suspended on a pillar that you can't reach until you go the other way around. Also, there are nightmare imps in the catwalk around the room that will attack; they can be picked off now or saved for later.

Go back out into the hall, past the starting point, and down the corner, dodging the dart trap while you kill the nightmare imps that appear. Then turn around and go back into the open doorway you passed by to enter the most open section of the map. First go left and kill the two arachnotrons in the caged loft that overlooks the large, dark courtyard. Go back right into the catwalk that takes you to the previous room with the armor pickup and radiation pit. Kill the nightmare imps that attacked you previously if they still remain. You can now reach the armor pickup. Head back and then turn right to kill the two arachnotrons in the main loft overlooking the aforementioned courtyard. Drop down into the loft and battle all the nightmare imps and cacodemons that close in on you from the courtyard. Beware that nightmare imps will appear and ambush you in the loft as well. Once you've killed all attacking monsters, make your way to the far back elevator niche which will take you down to a subterranean room lined with many stone columns and barons lurking.

In the subterranean room, make a beeline for the niche with a switch located along the same wall as the elevator on the opposite end. Hitting the switch will activate a large dart trap and cause massive damage to the barons. Stay in the niche during this time to avoid damage yourself. After the trap is finished, kill the barons. Then go back out to the loft and jump for the invulnerability sphere and make a beeline for the subterranean room again and activate the trap again. The blue skull key appears only while the trap is active and will disappear once the trap stops. Without invulnerability, you are sure to take a large amount of damage. Run to the elevator to escape the room before the invulnerability wears off.

Back on the main loft, jump down into the courtyard again, killing imps in caged niches above you, and find the niche at the far end barred by blue pillars. Acquiring the blue skull key allows you to open this niche and activate the switch, which lowers a set of columns surrounding a switch in one of the corners of the main hall. Make your way to that switch and activate it. This will drop you down into a subterranean demonic library complex infested with sergeants, nightmare imps, Hell knights, and barons. The first room has a large, glowing yellow column. Navigate the three sections of the complex, killing all monsters in the way. Many are hiding behind corners and walls that will surprise you. Find the switch located in the furthest section of the complex that is guarded by a few Hell knights and a baron. This switch activates stairs leading to the end of the complex with another glowing yellow column. Beware of the two barons waiting behind the corners and the Hell knight on the lift leading into the courtyard. Kill them all and take the lift to reach the red skull key. Doing so will cause a horde of barons and cacodemons to appear in the courtyard to try to stop you. Take them all out, then head to the lift back into the main hallway.

Go around the main hallway and pick off the remaining nightmare imps, pinkies, and barons, then head for the red door that is directly across the hall from the entryway of the courtyard. Go through the door into the final central portion of the map. This portion has a fire pit in the middle that illuminates the area. Kill the nightmare imps along the tops of the walls, then run through the fire pit to collect the yellow skull key which opens the door to the exit. Kill the barons that appear, open the yellow door and kill the baron inside, and hit the switch to end the map.

* The vertex count without the effect of node building is 1881.