MAP13: Devils Paradise [sic] is the thirteenth level of Memento Mori II. It was designed by Rhys Hughes and uses the music track "Damage Assessment" by Mark Klem.

Okay troopers listen up. This is area 13 also known to the corp as DEVILS PARADISE. [sic] You better be paying attention marines because I'm not sending no [sic] damn recon team down there to bail you out. Okay?

Right now, we are lead to belive [sic] that the damn hellspawn that were [sic] sending you in to wipe out have got thier [sic] hands on one of our A-bombs. Its [sic] up to you to go in, locate the threat and take care of it. There are some Arachnotrons located round in area 13 and they have some kind of psychic link to the A-bomb. Intelligence informs us that if you take care of them you'll take care of the bomb too. However fail to do this and you'll never leave that place alive...

This just in marines. Intelligence informs us that they have located a living mass of somekind [sic] in the lower reaches of DEVILS PARADISE. [sic] We don't know what the hell it is but we can confirm that it posesses [sic] regenerative capabilities. So be on your toes at all times. 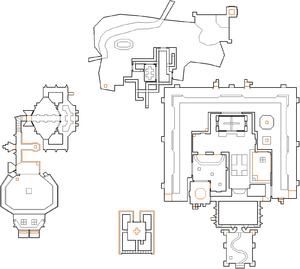 Map of Devils Paradise
Letters in italics refer to marked spots on the map. Sector, thing, and linedef numbers in boldface are secrets which count toward the end-of-level tally.

Healing items are in somewhat short supply in this map, so conserving health would be well-advised for completion of this level.

You begin in a room with a central octagonal pillar. Lower the central pillar and collect a super shotgun. Head out the door in the northeast and take out the nearby shotgun guys. Continue north, and clear the cage ahead containing some shotgun guys (and on Hurt me plenty and above, a chaingunner or two).

From there, head south into the area with four spots of light on the floor. You will attract the attention of up to three cacodemons, three demons and two spectres. A teleport trap will also begin teleporting ten imps onto the demon-face platform to the east. On Hurt me plenty, there is also a baron of Hell that will teleport in, while on Ultra-Violence and above, two revenants are added. Kill the monsters as they come - you can even cause monster infighting by placing yourself at the right angles.

Next, head south into the lava, and head out into either of the marble corridors in the south. Use speed - the lava is the most damaging type of damaging floor. Follow either corridor around to a doorway leading to an outdoor area with a narrow windy path. Your first order of business is to clear the imp cage at the end of the path. On Ultra-Violence and above, an extra cacodemon will also be alerted.

Continue forward along the narrow path, but once the narrow path starts bending, look to the rear left and right and spy two alcoves in the back corners of this area. Each has a shotgun guy (Hey, not too rough and below), or a chaingunner (Hurt me plenty and above). See if you can tag them before they begin opening fire.

As you continue further along the winding path, up to two more cacodemons will wake up. Use your super shotgun to pop. If you fall, find the alcoves in the back corners and lower the metal walls, which you can ride up to a teleporter that takes you to the start of this area. Collect the red key at the end of the path.

Backtrack through the lava to the area with four spots of light on the floor. Jump onto the platform in the east with the demon-face platform, then jump off. To the west of this area, a new teleporter will have appeared. Go through it.

You are now outside. Around you is a catwalk filled with imps. On Hey, not too rough or below, there is also a Hell knight on top; on Hurt me plenty and above, there is a revenant. Find the platform in the southwest and ride it up to the catwalk. Mow down all opposition and head to the north, where there is a red door and a blue door. Open the red door, but on Hurt me plenty and above, beware of the cacodemon hiding just behind it. Grab the medikit (if needed), then step through the teleporter.

You are teleported to a new area, facing a window. You will immediately alert two cacodemons (Hey, not too rough and below), two cacodemons and a pain elemental (Hurt me plenty), or four cacodemons and a pain elemental (Ultra-Violence and above). Head out the corridor you are in, down the steps and around into the courtyard. As you enter the courtyard, an alcove in the southeast opens, with a Hell knight (Hurt me plenty and below) or a baron of Hell (Ultra-Violence and above). More importantly, behind it is the yellow skull key. While you kill it, be careful not to step on the cross-shaped hole in the ground, or it will teleport you back to the previous outdoor area, forcing you to run back here again. If the alcove closes, step back into either entrance to the courtyard to re-open it.

Collect the yellow key from the alcove, and step into the cross-shaped hole in the ground to teleport you back to the previous outdoor area.

Head to the southeast of the outdoor area, and go through the yellow door. Another teleporter lies ahead. Take a deep breath, and prepare for the hardest part of the level.

When you step through the teleporter, you will be teleported to a blood-filled catwalk surrounding a courtyard with a mancubus in the middle. The catwalk is teeming with former humans, and the courtyard is full of obstacles that impede movement. To make things worse, there are three cacodemons to deal with, a cage with a Hell knight and up to three imps in the north, and a teleport trap in the south summoning more imps (and on Hurt me plenty and above, revenants)! Use everything at your disposal to survive this sudden spike in difficulty. If your source port allows you to quicksave, now is a good time.

When you have fought your way through that nasty sequence, head through the teleporter in the courtyard. This will take you behind the northern cage. Clean up any stragglers - the worst isn't over yet. When you head north, a trap opens nearby, releasing up to two Hell knights and six shotgun guys behind you. However, since their ambush flags are all set, you only need to worry about them when you pass by that trap. You can double back now and kill them, or simply move forward and skip them.

The plasma gun in the next dead end looks tempting, but acquiring it opens a trap behind you with up to eight imps and an arch-vile. Unless you're good with your plasma gun and can mow down the imps before the arch-vile immolates you, taking this weapon may not be such a good idea.

Continue forward and climb the stairs to a big door. Open it to proceed to a large cavern with a bridge across lava. Lure the shotgun guys and Hell knights on the bridge closer - don't head forward yet. When they have been killed, move forward onto the bridge itself, then move back behind the door - this opens two traps near the door with up to four cacodemons, which you can funnel and kill with your preferred weapon.

Next, walk onto the bridge and continue forward. Watch for chaingunners on either side and two pain elementals that will ambush you. You are not getting back up if you fall off this bridge!

At the end of the bridge, watch for two shotgun guys and up to two Hell knights. Your best bet is to ignore them, grab the blue key and run into the teleporter, which leads you back onto the catwalk in the first outside area. Now they will have to teleport here and fight on your terms.

Head to the blue door in the north of the catwalk. Open it to be presented with two teleporters - either one takes you to the different parts of the same area.

This next area is a darkened maze with spectres. Every time you step on a lit grey square, that's a hint that a spectre is in position to ambush you. Your task is to find the teleporter to the outside area. The simplest path through this maze is:

In the next outdoor area, you have a load of chaingunners and cacodemons (and one pain elemental) to deal with. The first one that needs to die in the chaingunner east of your teleport landing. A well placed rocket to the platform ahead with shotgun guys and chaingunners should be next. head around this area, pulling out enemies in ambush, and see if you can get the chaingunners to infight with the cacodemons for you.

Finally, head to the water-filled pit in the east of this area. Take out the arachnotron and the nearby chaingunners (watch for two in the northwest and southeast corners). Jump into the hole in the floor behind the arachnotron to exit the level.

The elevator pillar (sector 10) in the beginning of the level cannot be triggered from the northern or northeastern side, while every other side can be pressed on to do so.

A rocket launcher (Thing 462) and a super shotgun (461), marked as multiplayer-only, have no flags set for any of the difficulty classes, so they do not actually appear in the level. Also a chaingun (thing 459) and BFG9000 (463) have no flags set at all.

This level is one of the few in Memento Mori II that can be completed in under a minute. At the beginning of the level, you can trigger the elevator pillar, and then jump off of it and through the window as it rises, preventing you from having to go all the way around to enter the red skull key section. Also, in the western side of the building, you can strafejump through the window from the westernmost corner of the top step, although this will require some practice before you can pull it off consistently. Both of these jumps were discovered by Oyvind Stenhaug, and first demonstrated in his 1:00 UV speed run (m213-100.zip). In addition, the blue skull key room contains a second exit that is intended to be accessed only in multiplayer gameplay; walking between the yellow skull pegs triggers a linedef that closes off this exit, forcing you to find the intended one. However, it is possible to circumvent this linedef by climbing onto either one of the pegs and dropping off of them toward the door. This will let you access the multiplayer exit and end the level early. This shortcut was also discovered by Stenhaug, and first documented in his 1:11 UV speed demo (m213-111.zip).

The fact that you must proceed far through the map and then return to the start of the level (or close to it, in any case) to obtain secrets #4 and #5 makes this map very unpopular for UV max running.