MAP13: Downtown is the thirteenth map of Doom II. It was designed by Sandy Petersen and uses the music track "DOOM". The par time is 2:30. 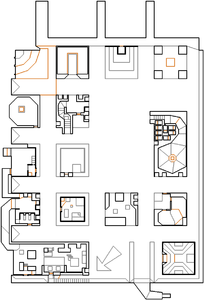 Map of Downtown
Letters in italics refer to marked spots on the map. Sector numbers in boldface are secrets which count toward the end-of-level tally.

From the start, head left around the grey brick wall next to you. There is a huge arrow drawn on the ground near here. Follow it up the stairs and into the door at the top. Inside, make your way to the northwest corner of this storage area and drop into a lower corridor. At the end of the hall is a silver wall which lowers as a lift (A). Ride it up into a room with several gargoyle faces. Ignore the teleporter for now, and instead drop through the shaft in the alcove next to it. Follow the narrow hallway through another door into a tall room. Get the blue key here and go through the teleporter ahead (B) to return to the starting area.

Now make your way through the warehouse again and return all the way to the gargoyle-faced room. Go through the teleporter you passed over earlier, and you'll arrive on a ledge surrounding a building in the middle of the level (C). Make your way along the ledge to the opposite side and go through the blue door. Inside, you can run across the tops of the crates to get the invulnerability sphere if you so desire. In any case, drop down and go through the teleporter there (D). This takes you to the top of a tall building in the north. Grab the red keycard in front of you and drop down to the ground (E).

Go all the way to the southeastern corner of the map and enter the black building there through the red door. At the back of this room is a tall lift (F). Approach it and it will slowly lower. Once it reaches your level, ride it all the way back up to the top. From the top of the lift, you can drop down to the right onto the yellow keycard (G). Once you've gotten it, return outside once more. The building locked by the yellow key is in the northwest corner of the map, just south of the "crusher" with the plasma rifle (H). Enter it and step into the lava square to exit.

The official French name of this level is Le Centre ville.