MAP13: Drop 'Em! is the thirteenth level of Eternal Doom. It was designed by Dietmar "Dia" Westerteicher, and uses the music track "Instant Death!" by Rich Nagel. As further explained below, this level is serves as forced transition from the Eternal I maps into the first proper Eternal II map, MAP14. As such, it is by far the smallest map in the 32-level megawad. 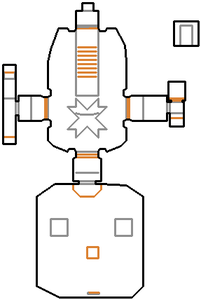 Map of Drop 'Em!
Letters in italics refer to marked spots on the map. Sector, thing, and linedef numbers in boldface are secrets which count toward the end-of-level tally.

The main idea of the level is to make sure you start with just a pistol in the next map. When you enter any of the doors mentioned below, you will eventually find yourself on a raised platform leading to a door, with a Wolfenstein SS behind it. As you run to this door, you cross some linedefs activating crushers elsewhere in the level. This results in a Romero's head being blown up by some barrels, along with the player's voodoo doll.

In the beginning room, you appear in front of a banister and next to three doors, one behind you (south) and another two to your left and right (east and west). There is also a floating text in the middle that reads The portal to Eternal Doom II cannot be used by the living, which is a hint to what the level is about.

Whichever route you choose, it is recommended to reach the exit as quickly as possible. It is because you must perform things that damage you, instantly or eventually, and you have a limited stamina. It does not matter how much health or armor you have when you get to the exit as you will be killed anyway once you reach the place.

East door - The Way of the Bird[edit]

Behind the door, you will fall down into a small room with an arch-vile and a Jump here sign. You need an arch-vile jump to reach the zone behind the sign and to be further transported to the other side of the banister you saw in the first room. Go through the door in front of you to enter the final room and become killed there.

Note that in front of the arch-vile (in the direction he is facing initially), there is a teleporter. Sometimes he teleports before making you jump. If it happens, you should try to lure him near the door. He is able to rise you while being there so that you can enter the target zone. In case you fail to do this, you will have to go through the teleporter and enter another of the other two doors in order to exit. In addition, you need to make sure you kill or avoid the arch-vile before he kills you.

When you enter the door, make sure you grab the soul sphere. You need to be hit by a rocket from a cyberdemon to go through the teleporter behind you. You will be taken to the exit room.

Before you go through the door, get the weapons in front of you. Jump down to the toxic floor, quickly grab the radiation suit, hit the switch in front of you and kill the revenants. Wait for the teleporter in the middle to lower and go through it to the last room.

If the player has more than 100% health at the end, he will become a zombie, however this is insignificant as the level ends immediately.

It is actually possible to survive this level's death exit on I'm Too Young To Die if the player has sufficient health and armor.