MAP13: GATES OF THE PHOBOS HALLS is the thirteenth map of 32 in 24 a deathmatch megawad. It was designed by Matt Cibulas (RottKing) and uses the music track "".

The map was the sixteenth submission to the project, arriving just over fourteen hours into the session. According to Cibulas, it took about two hours to build. 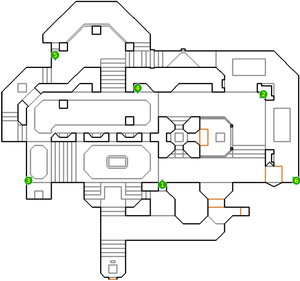 Map of GATES OF THE PHOBOS HALLS 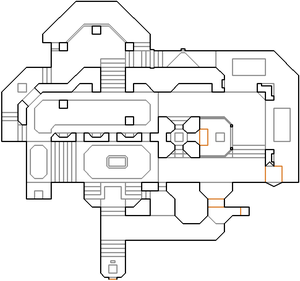 Map of GATES OF THE PHOBOS HALLS

This is a moderately-sized techbase map with a lot of interconnection in its layout. The centre of the map features a large hallway that forms a complete ellipse around the map, with the northern half at a higher elevation than the southern half by means of short staircases. The northern half has more cover available, but fewer essential items, with a box of shells towards one end, and two rocket boxes towards the other. Three little breaks along the inside wall near the west end allow the player to jump down to the southern half of the hall, and each of these gaps contain a stimpack. The southern half of the hall contains less cover, but the rocket launcher and some ammo for it can be found towards the west end. Towards the eastern end of the hall, a tiny room containing a super shotgun can be found. This room also contains a lift, which, if players can survive waiting for it, will take them to a platform with a megasphere, from which they can drop back down into the hallway.

At the western edge of the hall, players can go up another set of stairs that leave the hall and leads up to the northern map perimeter, taking a super shotgun and a megaarmor along the way. This northern section can also be accessed from another staircase, further along the north half of the hall, as well as by a lift in the south-east corner of the hall, which holds a energy cell pack, and a rocket launcher can be found at this far end of the area, though this entrance is less useful due to the waiting required. Stairs that lead up to the marble wall area at the map's northern extremity can be found where this area transitions from a grey metal floor to blue carpet. The marble wall area is a horseshoe-shape that wraps around the west end of the northern section and leads to a plasma gun.

The southern extremity of the map is only accessible by a lift near the south-east corner of the main hall. It leads down to a small sewer area with an entirely damaging floor that deals 10 damage before armor. A radiation suit is immediately available by the lift for the first player to enter this area, and next to it is a teleporter that will drop the player on a ledge (which has no items) at the western end of the main hall. The chainsaw is available near the middle of the sewer, but if the player moves along to the western end, they can find another radiation suit, and at the end of the sewer, the BFG9000 can be found, next to an exit switch, though depending on server settings, pressing the exit switch may kill the player. This is a dead, end so the player will need to fight their way back to the teleporter to escape the sewer.