MAP13: Hard Facility is the thirteenth map of Plutonia 2. It was designed by Fredrik Johansson, Adolf Vojta (Gusta) and Sam Woodman (Metabolist) and uses the music track "Donna to the Rescue" by Robert Prince. The par time defined in MAPINFO is 2:30. 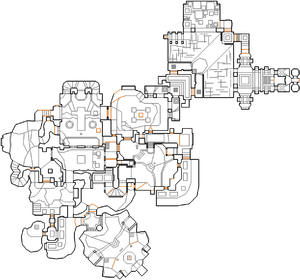 Map of Hard Facility
Letters in italics refer to marked spots on the map. Sector, thing, and linedef numbers in boldface are secrets which count toward the end-of-level tally.

Open the door at the start, killing former humans and imps. Open the next door and kill the shotgun guy, then open the door behind him. From here, you should make your way to the cross-shaped walkway to the north, which you can get to by following the red floors going northeast. It is a good idea to take out any monsters you meet along the way, to save you from any trouble. Also, open the UAAF door you see right when you enter the area and climb the crates to the right to retrieve a super shotgun.

When you reach the cross-shaped walkway, go to either side of it and jump either northwest or northeast, to a ledge with imps. Go around and up the steps to retrieve the red keycard. Backtrack now to the door that lead you to this area and then open the UAAF door again. There is a red switch in this area, press it and the switch behind it. A wall of cacodemons opens up nearby, while a bridge rises to the north allowing you to cross. On the other side, press the big skull switch and a platform will rise up to the east of the cross-shaped walkway. You can then go on the cross-shaped walkway and jump east to the next red door. Open it to find a rough crowd of enemies. After killing them, you will notice another red door to your right. Ignore this one and walk around the outer walkway, past the blue bars, to the next door. Open this door and head left, killing anyone in your way. Open the UAAF door and take the first door you see which is on the right. The next enclave has a window showing the area with the yellow keycard. To lower the key, flip the switch on the wall, then backtrack two rooms. There will be a wall of chaingunners to your left, so kill them and head through their chamber to reach the yellow key area where you can grab the key. Look out for the ambush, then open the yellow door in the northwest. Climb the steps, looking out for shotgun guys and imps behind you, then open the next door. You will reappear in the room east of the cross-shaped walkway, but now you can jump to the teleporter in the center.

The teleporter takes you behind the blue bars, so open either door and kill the enemies before the bridge leading northeast. At the other end are two more doors. For now, the one to the right needs the blue key, so take the left one. In the large storage room, make your way to the left side and climb the crates up and you will find the blue skull key. Now go back to the blue door and open it, killing the monsters in the next hallway. In the room that follows, there is a switch at the top of some steps. Flip it, and the two side doors next to the steps open up, revealing imps. Head through either one and kill the arch-vile guarding the next switch, which lowers the blue bars blocking your exit as well as the ones back in the room you teleported into.

Upon leaving the area, watch out for new monsters as you make your way back southwest. In the southern part of the map, you might have noticed some blue markings. This is the final area you need to go to. Look out for monsters that pop up when you approach this place, and kill anyone across the bars when you can. Press the nearby switch and the switch behind it, and you will have to contend with a few teleporting enemies that will proceed to surround you. After fending them off, head for the exit in this area, looking out for two arch-viles that come in when you reach the exit platform. Grab the megasphere in the back too if you need health.

If played in cooperative, this level may become impossible to finish. If one of the players crosses the trigger behind the blue door (Linedef 2284) which makes the blue skull marked bars behind him to close, and dies inside that room, the level will become impossible to finish due to the only trigger to reopen the bars is a switch in a room following the blue key door (Linedef 2635).

* The vertex count without the effect of node building is 2761.