MAP13: I'll Replace You With Machines is the thirteenth level of the first episode of Back to Saturn X. It was designed by Sarah Mancuso (esselfortium) and Paul DeBruyne (skillsaw), and uses the music track "Escape Velocity" by James Paddock. The par time is 4:00. In the official add-on version, this level's name is Keep Being Cryptic. 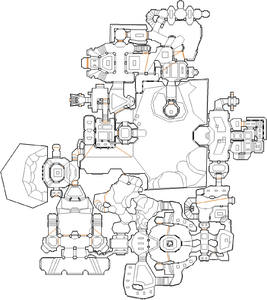 Map of I'll Replace You With Machines
Letters in italics refer to marked spots on the map. Sector, thing, and linedef numbers in boldface are secrets which count toward the end-of-level tally.

Head round the corner to find a shotgun guy guarding a super shotgun, which will help you kill the mancubi directly ahead, then go through the doorway on the east side of the room and follow a corridor round to some steps leading up to an armor and chaingunners. Press the "LOCK" panel on the wall here to open a compartment with a few enemies, then go back to the starting room to find that the south walls have lowered to reveal one or two arch-viles. Enter this chamber and press the arrow button to lower some steps, head down to a room with a lava and step across it (one or two chaingunners will appear in a cage behind you) then go down some more steps and turn right to reach a room with a circular windowed structure. Clear the enemies inside and around the structure (including a pain elemental on Ultra-Violence (UV) and Nightmare (NM) skill levels), then step around the north side of the structure to lower a nearby lift.

Ride the lift up and follow the path east then west, kill an arachnotron that blocks your path then take the nearby radiation shielding suit and enter the lava pool behind it. Run north-west to a rocket launcher and climb the steps next to it, then run across two ledges to reach a platform with a mancubus; flipping the switch next to the mancubus will lower a wall on the south side of the lava, revealing one or more arch-viles and revenants that you can kill as they approach. Enter the room that these monsters emerged from and go into the tunnel in the south-west corner, follow it until you reach a few small monsters then head north through either of the low doorways and turn right to kill an arachnotron (plus a mancubus to your left on UV and NM). The arachnotron and mancubus are guarding staircases that lead up to a pair of "LOCK" panels - press both panels, kill any imps and/or revenants that are released behind you then go into the courtyard between the panels to see one or two arachnotrons guarding a doorway. Go through this doorway and press the arrow button on your left to lower a lift leading up to the next section.

Kill one or two chaingunners inside the chamber to your left along with some waiting shotgun guys, then enter the alcove in the south wall to find another "LOCK" panel; pressing it will open the chaingunners' chamber along with a compartment holding imps and cacodemons. Enter the chamber and press the arrow button inside it to open the north-east door, then head through and go round the next corner to kill an arachnotron waiting ahead. Approach the door next to the arachnotron to open it and reveal a chaingunner, then step through while noting the blue key door on your left as well as two revenants opposite it protecting a plasma gun. Head north past a shotgun guy until you walk between two candelabras, dodge a mancubus waiting to your right then continue forward until you reach another blue key door. Turn right (east) and go up some steps to a red platform, dispose of an arachnotron and imps/revenants that appear then drop down to the floor beside the arachnotron and dispose of any enemies that are released to your right and left. Head south to find an armor among a pile of corpses, then go through the open door in front of you to find a couple of zombies guarding the blue keycard.

Go back to the previous room and enter the east closet to find a button requiring the blue key, press it to open some bars to the north then head through to some steps next to a lava pit; you will see the building ahead open to reveal a cacodemon and pain elemental. Drop into the lava and climb up the stairs on the west side to enter the building, then press the red "LOCK" panel between the windows to open a door at the bottom of the first staircase - this will also release more cacodemons behind you. Drop back into the lava and kill any imps and revenants that emerge from the door you just opened, then head through and follow the corridor to the second blue key door you saw earlier; pass through it, then head south to the first blue door and open it to confront an arachnotron. Kill any imps waiting on the south platform then climb up to it and flip the switch in the south-west corner to open the north wall, then head through the wall and down some steps to a red-floored room. Head forward to an arrow button, kill any revenants that are waiting behind you then press the button to lower the west wall and release an arch-vile. Step past this wall and go down the steps to find a shotgun guy protecting the exit switch.

* The vertex count without the effect of node building is 4633.