MAP13: I can't put enough quotation marks around the word 'map' so I won't is the thirteenth map in the DMP15B.wad mapset of Doomworld Mega Project 2015. It was designed by James Collins (an_mutt) and uses the music track "Watz Next," originally composed by Lee Jackson for Rise of the Triad. 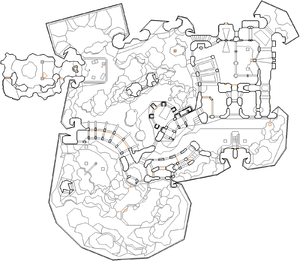 Map of I can't put enough quotation marks around the word 'map' so I won't
Letters in italics refer to marked spots on the map. Sector, thing, and linedef numbers in boldface are secrets which count toward the end-of-level tally.

* The vertex count without the effect of node building is 3749.