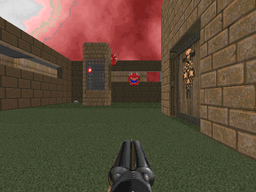 2 cacos in the beginning place

MAP13: Last Look at Eden, designed by Yonatan Donner, is the thirteenth map of Hell Revealed. It uses the music track "Goin' Down the Fast Way" from Rise of the Triad.

This is an outdoor level, one of my favorites. It's the first of the new Hell Reveled maps (the "murder" maps) and has some tricky fights - such as the nearly-impossible cagefight in the blue key area. Attractions also include a fully-shaded area. In short, don't miss this one! And, as the name suggests - it's your last look at Eden... 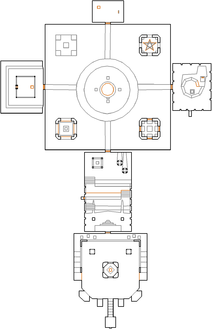 Map of Last Look at Eden
Letters in italics refer to marked spots on the map. Sector, thing, and linedef numbers in boldface are secrets which count toward the end-of-level tally.

There's no point beating around the bush: if you barely eked by on MAP11, this one will come as a nasty surprise. On the bright side, once you can beat this level you probably have the skill to beat the rest of the WAD... with time and patience.

There are two places you are likely to die horribly. The first is the very beginning: the shotgun shells you're given are laughable compared to the amount of resistance in the first courtyard alone, and when you open the door to the next room... about a dozen revenants teleport in accompanied by an arch-vile.

If you're skilled, you can run by all of the enemies in this first room and the next, and come back when you're better equipped. However doing so requires a lot of luck even for veteran speedrunners, so you may want to take a more systematic approach:

The rest of the level is much easier by comparison. As a quick note, in the central courtyard, monsters cannot step between the path (brown floor) and grass (green floor), with several important consequences:

The yellow keycard is in the southeastern building in the central courtyard, make sure to get it. The rest of the buildings on the perimeters are purely optional. The northeastern building with the pentagram and soul sphere will spawn a lot of monsters when you pick up the soul sphere. The southwestern one holds a spider mastermind and a rocket launcher. Through the yellow door on the eastern side of the courtyard, head up the spiral staircase to a lion switch. Press this switch then head back to the central courtyard, where you can access the central fountain where the red key is (but make sure you kill the cyberdemon first). After getting the key, watch out for pain elementals that teleport in, and then enter the red door on the west side of the courtyard. The second tough area in the map is the cage trap housing the blue key. Saving the soul sphere and megaarmor for this fight makes it much easier. Saving all of your rockets (about two dozen) is also strongly recommended. Above all do not panic - focus on killing the chaingunners first, then the revenants, grabbing a health pack as necessary.

After taking the teleporter back to the start, be sure to kill any remaining enemies you may have missed, plus a cyberdemon that teleports in and the arch-vile on top of the exit. Don't linger too long at the exit to this map... the next one is not any easier.

* The vertex count without the effect of node building is 1076.