MAP13: Nation Gone Dry is the thirteenth level of the second episode of Back to Saturn X. It was designed by James Paddock (Jimmy) and Richard Frei (Tarnsman), and uses the music track "Scattered Ashes" by James Paddock. In the official add-on version, this level's name is Drowntown. Similarly to other maps of the episode, it takes place in and around stony structures placed in a rocky landscape; several times the player has to fill basins and valleys with water in order to progress. 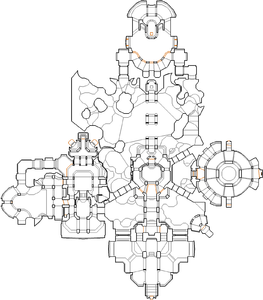 Map of Nation Gone Dry
Letters in italics refer to marked spots on the map. Sector, thing, and linedef numbers in boldface are secrets which count toward the end-of-level tally.

From the starting area, head south into the building; proceed further south until you come to an outdoors area, with a switch at the end. Pressing this switch fills a basin near the entrance to the building with water, allowing you access to the yellow skull key. Picking up the key will automatically open the two yellow-keyed doors nearby. Head through the western one, proceed west, and drop into the large pool of green liquid. Head forward; in the outdoor area, at the western end is a switch. When pressed, it raises the level of the liquid. Go into the now-accessible opening directly east of the switch, then turn north. Proceed along the ledge; to the north are several burning furnaces and a red key. Pick it up, but beware of the ambush that follows. To escape this area, drop down to the south-west.

With the red key in your possession head back to the double yellow-keyed doors, and this time go through the eastern one, then go north to come to the red-keyed door. Open the door, go in, drop down into the water and press the switch at the eastern end. It will lower the water level in the cistern, eventually revealing two niches to the north and south. Press the switch in the northern niche to reveal a teleporter in the sourth one.

Go back to where you began the level. You will see that the valley is now flooded with water. Now you can go north-east or north-west--either way will lead you to a passage through which you will arrive into a new, large outdoor area. Head north up the stream; you will come to the exit teleporter.

* The vertex count without the effect of node building is 3528.

The level was originally designed by James Paddock, but his map went over the vanilla limits in many places, forcing Richard Frei to remake the map from the ground up. As a result, while the layout, gameplay and overall concept are left from Paddock's original work, nearly all of the map architecture is by Frei. Originally, the map only contained one instance of a changing water level (flooding the starting valley); Frei added more such events to "make it less of a one off thing". Frei also tweaked the gameplay a bit, including replacing the numerous Hell knights and barons of Hell with revenants and arch-viles. As of September 2014, Paddock was working on an updated version of his original map, with a different style and improved vanilla compatibility.[1]

Frei submitted his version of the map just a couple of hours before the deadline.[2]