MAP13: Nukage Processing is the thirteenth map of TNT: Evilution. The layout was designed by Brian Kidby with minor touchups and additions by Ty Halderman, and uses a music track shared with MAP04: Wormhole and MAP29: River Styx.

This level was also ported to PlayStation Final Doom as MAP18: Nukage Processing. 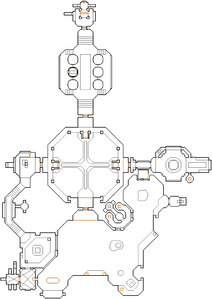 This map is known for three large rooms - the courtyard to the south, the nukage within the center, and the exit rooms to the north. The players start in the south-west corner of the map.

The yellow key is located in a room just off the courtyard.

When you start the level, head directly forward and attack or evade any monsters on route. You should reach a room where you see enemies on some crates as well as on the platform surrounding the room. With this route, you should at least collect a shotgun and a chaingun.

Open the door to the east. If you run south, you will encounter a teleporter, but will also collect the rocket launcher. To reach the key, you will need to enter the nukage area within the center, and run along the walkways and take the south door.

There is a shortcut that allows you to reach the yellow key by going directly from the starting room to the courtyard - see the secrets section below.

The red key is found to the east of the nukage pit, and is available once you have the yellow key.

After going through the yellow key door, you can find a berserk pack to your left, and a radiation suit to the right. Take the radiation suit, and clear out the enemies on the ground level. Climb the stairs to the second floor.

On the northern wall is a switch that will open the center column, and either a cacodemon, revenant or pain elemental. The red key is found within the slime pit revealed by the center column.

To reach the blue key, perform a running jump onto its platform. Note that getting the key will reveal a monster just north of the starting area (the monster type varies by difficulty). To avoid this, jump off the blue key platform on the southern edge; although if you want to avoid monsters, it's generally easier running to the exit at this point.

If you miss the jump to the blue key, or if you want to get it early, there is a pillar in the south-east corner of the courtyard. This pillar contains a lift on the south-eastern side that brings you to the midpoint of the teleport chain. You can also use this lift to reach two boxes of rockets (and a megasphere in multiplayer).

With the red and blue key, head to the northern part of the map.

The first room past the blue key is a simple nukage pit surrounded by six cylindrical containers. At the north end of the room is a red key switch that opens the door to the exit.

The final room is contains former humans, with chaingunners on the exit platform above. While the exit platform will darken as you approach it, the exit switch will remain lit. If desired, you can collect the computer map or light goggles to reveal the final opponents in the map.