MAP13: Obsidian Nightmare is the thirteenth map of Sunder. It was designed by Insane_Gazebo and uses the music track "Ending Titles," originally composed by Vangelis for Blade Runner. 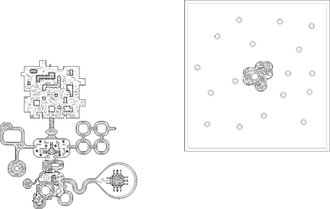 Map of Obsidian Nightmare
Letters in italics refer to marked spots on the map. Sector, thing, and linedef numbers in boldface are secrets which count toward the end-of-level tally.

The monster count in this level is lower than before, but do not be fooled, the enemy encounters here will still be considerably difficult. There are not many supplies that can help with defeating the enemies in this level, particularly in a few rooms.

Both shotguns will be available at the start, grab them along with the megasphere. The majority of the enemies here will be facing away, excepting the barons of Hell in the tunnel. The firepower from your current weapons will not be sufficient enough for most of these enemies at the moment, so enter the tunnel and get past the barons of Hell to the other side. The other enemies in the vicinity include a cyberdemon to the north (guarding the blue key) an arch-vile and revenants on a high ledge at the south end, imps in front, and Hell knights near the cyberdemon. Mancubi will be present behind the other side of the tunnel as well, and the high ledge to the northeast will have Hell knights, three barons of Hell, and two arch-viles. To reach this high ledge, there are two steps with lava and imps on them. The rocket launcher is located at the southwest end of this high ledge.

Northeast of the high ledge is a building with arch-viles and revenants that you cannot access yet. The grounds near this building will have more Hell knights and mancubi, along with an arch-vile, six cacodemons, an arachnotron guarding a yellow key switch, and a baron of Hell on the east side. A few more paths are locked off here, one to the north, one to the east (the chaingunners here may attack from behind the bars), and two to the southeast. At the northwest corner you will find Hell knights and a cyberdemon guarding the plasma gun, and another locked path going west. Note the huge lava pit in the middle. You do not want to fall in as there is no way to leave it.

When you are ready to proceed, go towards the building northeast of the high ledge and press the switch at the base. This will open up two entrances to the building, but will also cause pain elementals to emerge from the lava pit. Enter the building and press the switch inside, which will open up the two paths going southeast. Enter one of these passages to find an arch-vile who will teleport away. This applies to both paths, which loop to each other, with a cyberdemon and the yellow key in the middle. The arch-viles will teleport to the high ledge and the building northeast from there, so get rid of them accordingly.

With the yellow key, go back to where the arachnotron was and use the yellow key switch. You may be tempted to go into the large passage directly north of the switch, but refrain from doing so, as while it is open, the area you find will not be open just yet. Instead, head to the western passage, past the large pit. At the end of the passage will be a room of four arch-viles and the blue key switch. Of course, make sure you retrieved the blue key from the cyberdemon near the starting point earlier. Also when you enter the room with arch-viles, cacodemons will emerge from the lava pit outside.

After you hit the blue switch, return to the large path going east, killing the chaingunners along the way. In front of the next building will be two cyberdemons and a lot of pain elementals. You will want to get rid of them, but you may have to stay on the perimeter, as much of the area is filled with lava. You need to be prepared before you enter the building as there is no ammo inside and you will have to fight off waves of enemies. Inside, get the megasphere and press the switch. The east wall on the northeast column will lower, and while it does, five revenants will teleport into the room. When the wall lowers all the way, flip the switch to cause the east wall on the southeast column to lower. While it is lowering, you will contend with six revenants and an arch-vile this time. When the switch is revealed, flip it, and prepare for five arch-viles to join the fray. Stand by the northwest column and flip the switch when it is revealed for the final wave: ten pain elementals. When you are finished, the southwest column contains the teleporter out of there.

Return to the main room and go to the north wall to find a new switch, which opens up the barrier next to it. You will have to turn left at the fork, as the other route is blocked off. In this room, note the three holes with lava, which you should avoid, and use the switch at the north wall. While you wait for the wall adjacent to the switch to lower, revenants will teleport into the room while pain elementals will emerge from the lava wells. Take care of them and flip the switch once it is revealed to leave. Return to the fork and head east this time, following the path down. At the green armor, head to the ground floor to see imps scattered around. Get rid of them but be mindful of the holes in the ground. You need to go north, and in order to that you have two side areas you need to accomplish in order to unlock the way there.

If you go left, you will wind up in some curved hallways. Press the switch in the middle. This will lower a wall containing another switch at the south end of this area, all while monsters teleport in. Hell knights will appear in the center and at the northern end, while four arch-viles and two cyberdemons show up at the south end. Do your best not to get surrounded here. When you can, press the switch at the south end, then go to the north end and press that switch to leave. This switch is repeatable, in case the bars out of this area somehow block you off again. You can then go right if you have not done so already, or if you have, skip to the next paragraph.

If you go right, you will reach four curved rings you can traverse. Press the switch in front of you. This will cause bars blocking a teleporter to the northeast to lower. You will have to fight eight arch-viles in these rings while these bars lower. When you can, enter the teleporter to be in a completely different section of the map. This area is populated entirely by imps. Make your way to the top and press the gargoyle switch, then use the teleporter. The gargoyle switch is repeatable, in case upon leaving the rings, the bars close again. Now you can go to the left side if you have not done so already. If you have not done so, go back to the previous paragraph, otherwise move on.

This final room is grandiose, but entirely deceiving. You will need to be extra careful of your footing, as there are several orange holes in the ground that can screw you over if you fall in them. Twenty-eight arch-viles and six cyberdemons will teleport into the room all around, and will prove to be an extreme hassle as they roam across the field attacking you from any which way. Of note is an invulnerability at the northeast end, a BFG9000 at the northwest end, and a soul sphere in between them. The exit is to the north, past a group of pillars over a pit of lava. Your first goal is the southwest corner. Go up the orange steps (being careful not to fall in the small lava pit there) and to the switch to the north.

Be prepared for the second and final round of enemies after you hit this switch. Six more cyberdemons will come in, along with fourteen arch-viles and fourteen cacodemons. The next switch will be near the middle of the area, a bit south from where the soul sphere building is, but you will have to duck, weave, and watch your footing as you battle monsters that roam the field. When you can, get to the switch and use it, which will open the exit door. Go over there and cross the pillars to reach it.

* The vertex count without the effect of node building is 25679.