MAP13: Polychromatic Terrace is the thirteenth map of Ancient Aliens. It was designed by Paul DeBruyne (skillsaw) and uses the music track "Gold Rush," composed by Stuart Rynn (stewboy). The par time is 9:00. 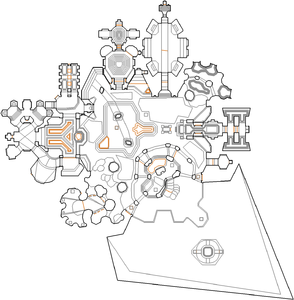 Map of Polychromatic Terrace
Letters in italics refer to marked spots on the map. Sector, thing, and linedef numbers in boldface are secrets which count toward the end-of-level tally.

Start by picking up the weapons and ammo in front of you. Up the stairs, you'll find a combat armor as well as a super shotgun, the latter triggering two stealth plasma aliens to teleport in. Head back down and around the tower to the main area. Teleporters on the outside of the stairs you climbed up will lead to a megasphere. The southwestern corner has a berserk and a rocket launcher. Picking up the rocket launcher will lock you in the room and spawn an ambush of imps, shotgunners, demons, lost souls, and a couple of Hell knights. Press the switch to the right to escape.

After gathering goodies, follow the rocket trail that leads into the room in the northwest corner of the map. Press the switch in the back of the room to lower a lift on the other side. Ride this lift up, and press the western switch to be dropped into a pit with some enemies including an archvile. Another switch to the north will open a set of stairs on the other side. Climb back up and deal with the enemies up here, including the two arachnotrons on an inaccessible balcony. Shoot a switch here to lower the yellow key.

Back in the main area, head to the southeast to find the yellow door. Enter the teleporter here, then use the walls in front of you to open a path to the blue key. The blue door is to the north, so head inside and prepare to fight a lot of imps, some of which will teleport onto the platform you're occupying. After a time, the walls will lower and the exit will be revealed.

After grabbing the yellow key, a closet to the northeast of the main area will open up with a couple of cacodemons and a pair of stealth plasma aliens. In here you will find the red key. This will let you access a now open door to the northwest. Run forward through the doorway to try and grab a plasma gun (or a BFG9000 on easy) and you will be teleported back to the first room. Walls will raise with more stealth aliens and a mancubus. The second room will also now have some revenants and demons. You can now grab the weapon, and a switch in the southwest corner will let you back out to the main area.

* The vertex count without the effect of node building is 5099.