MAP13: Realm of Chaos is the thirteenth map of Doom 2 Unleashed. It was designed by Michael Jan Krizik (valkiriforce) and uses the music track "DOOM" by Robert Prince.

When using the music WAD included with this megawad, this level instead uses the music track "The Musang Blues" by Paul Corfiatis. 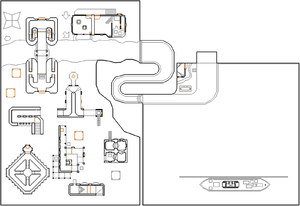 Map of Realm of Chaos
Letters in italics refer to marked spots on the map. Sector, thing, and linedef numbers in boldface are secrets which count toward the end-of-level tally.

Flip the switch on your left to lower a lift and ride it up to a narrow passage with a chaingunner, or a shotgun guy on I'm Too Young To Die (ITYTD) and Hey Not Too Rough (HNTR) skill levels. Head forward past an imp and open the tan door, then press the button behind it to lower a lift leading to another door. Open this door to get outside, then press the button in front of you to raise a set of stairs. Climb the stairs and follow the path round, watching out for three windows that open to reveal chaingunners, until you reach another switch which will lower a lift to the east. Ride this lift up and follow the path north until you reach a super shotgun guarded by a revenant, then continue following the path south to a skull switch which will raise a bridge leading to a platform to the east.

Cross the bridge and flip the switch on the other side to build two staircases going down and up, then follow these staircases into a square building and climb the steps up to the red keycard - on ITYTD and HNTR you will only need to deal with shotgun guys, but cacodemons and a Hell knight are added on higher skill levels. With the red key, head west through the window to drop to ground level then open the door in front of you with red key markings, pressing the button behind it to lower a lift. Ride the lift up then follow the path west and south up two more lifts, before heading north to a teleporter guarded by knights. After stepping into the teleporter, follow the steps up to the blue keycard which is guarded by an arch-vile.

Drop to the ground and head north until you reach a brick building. Open the door with blue key markings and kill the zombies waiting behind it, then go left and right to find two revenants guarding buttons. Press both buttons to lower a pair of steps then head up the steps and flip the switch at the top to lower the platform in front of you, revealing one or two revenants and other monsters. Kill everything blocking the way forward then flip the switch again and cross the platform before it rises, ready to kill two chaingunners lying in ambush (or knights on Ultra-Violence (UV) and Nightmare (NM) skill levels). Turn left and head into a passage with a switch, flip it and head up the stairs to a lift - ride the lift up to a room with a pain elemental (or a demon on ITYTD and HNTR) then press the button behind it.

Return to the previous room and go to the east wall, then turn right to see another switch next to a staircase. Flip the switch and follow the stairs to another lift leading to another room with a pain elemental (or a demon on ITYTD and HNTR) guarding a second button. Press this button then return to the previous room to find that the bars blocking the north door have opened - go through it and kill the mancubi waiting on either side, then head east until you reach a wooden staircase next to a yellow key door. Climb the stairs and go through the tan door on your left, then flip the switch behind it to lower a platform with many zombiemen, plus an imp and two shotgun guys on Hurt Me Plenty (HMP) skill level or higher. Kill everything then press the button in the south-east corner to raise a set of steps behind you.

Climb the steps and turn right, then flip the switch in front of you to reveal two monsters (revenants, shotgun guys and/or a chaingunner depending on skill level). Go round the corner to find the yellow keycard, which is guarded by a chaingunner on all skill levels plus a demon on HMP or an arch-vile on UV and NM.

Leave the building, killing a newly-revealed mancubus on the way, and go down the wooden steps to the yellow key door you passed earlier. Open the door and press the button behind it to lower the stairs and reveal another door, which leads into a room with two columns. Kill the waiting monsters, flip the switch on the south face of the eastern column, then use the switch in the north-east corner of the room to lower the staircase again so you can get back outside. Turn left and follow the wooden arrows into the river, then look east to see mancubi and shotgun guys emerging from a tunnel. Kill the monsters and go into the tunnel, following it round past various monsters until you get outside.

Continue following the river, killing any arachnotrons blocking the way, until you reach the end then go up the steps on your left and enter the building ahead. Kill the waiting revenants and flip the switch behind them, then go outside and flip the switch inside the walled structure to the south. The barrels on the ship visible to the south will explode, and the level will automatically end after a few seconds - grab the berserk pack and armor next to the switch before this happens.

Lower the third lift after the red key door then run south to land on a ledge with a chaingunner. Go inside the building here to collect a chainsaw, then head east down some steps to collect a computer area map. The moving floors here will return you to ground level.

If you drop into the river dividing the west side of the level, you can return to ground level by using two teleporters under the blue key building. These teleporters will allow you to telefrag the four mancubi on wooden platforms in the south-west area.

After passing through the building behind the blue key door, turn left to see a star-shaped rock with a berserk pack on it. An armor pickup can be found on a small rock to the south.

A pool of gore can be found next to the yellow keycard. Open the wall next to the gore and step through it to telefrag the mancubus waiting in ambush.

* The vertex count without the effect of node building is 1949.