MAP13: Ruins of Skania is the thirteenth map of Sunlust. It was designed by Daniel Jakobsson (dannebubinga), and uses the music track "Quickfast" by Paul D. (originally made for NOVA: The Birth). 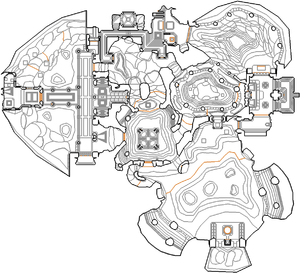 Map of Ruins of Skania
Letters in italics refer to marked spots on the map. Sector numbers in boldface are secrets which count toward the end-of-level tally.

You start in a garden-like area. Take the shotgun, security armor and a chaingun. Push the unlit skull, and you will be in a long grey corridor. When you will be able to turn left, do that to get super shotgun. Proceed further along the corridor until you meet a skull button at the end. Push it and you get back to the starting place. Right before you is a cacodemon or a mancubus, depending on your skill level, go to that new area (southeast).

From here the yellow key can be seen. You need to get to the central area where the key is obtainable. For this, walk around towards east along the alley. When you first enter the central alley, the imps will rise out of the sludge. Dispatch them and head to the key pedestal. Turn the lever next to the pedestal. The key is accessible but you also have to fight spawned enemies.

Now you need to head to one of two yellow doors. You may head back to the starting garden in order to use the first yellow door there, or you can go to the southwestern watery cave where there are an altar, yellow and blue doors located but this is not recommended, since there will be much larger enemy groups then those in the start.

Once you came to one of the yellow doors, open it. Walk on the bridge with several columns on it. And open the door to the brick building (note that secret #1 is accessible here). Turn right and step to the outside alley. Go forward, and you will eventually arrive a small brick room with the blue skull key. Take it and the wall ahead of you will lower.

Now, head to the yellow door which is south, open it and you will be in the watery cave with altar on the water. One of the columns of the altar has a blue skull bar that marks that button requires blue key. If you want you may press it to get plasma gun but this is optional. Also, secret #2 can be found here.

Enter the blue door. Ahead of you is a large open alley. Drop there and go to the red key. The spiderdemon will be spawned and two imp traps will open. Knock off the spiderdemon and take the red key. Taking the key will open three traps one of which contains at least one arch-vile that guards the switch. You have to press this switch in order to get out of there. Once you do this, go to the left (west) and walk upstairs (blocking bars will be here unless you press the switch). Go to the east of this area and open the red door.

Behind the red door is a room. Walk up the staircase in this room and turn the lever. This will open two walls behind you. Go to that new room eliminating all the enemies. Turn another lever in this room and beware an arch-vile ambush behind you. Return to the first room, to where the first lever was. Enter the low-ceilinged closet and turn the third lever. The open area to the north is accessible. Drop there. Make your way to the lift at the end. A large metal pillar blocks your way. Lower it manually and prepare to fight with a cyberdemon (on easy skill levels there are actually four barons). Once it is dead (it would be difficult to dodge his rockets not killing him while the lift is lowering) use the lift to get higher. The exit is here. Step on the silver portal.

* The vertex count without the effect of node building is 9032.