MAP13: Solstice is the thirteenth map of 2048 Unleashed. It was designed by Olivia Riley (Getsu Fune) and uses the music track "Valen's Fortress - Part 1" from Threads of Fate, made by Junya Nakano. 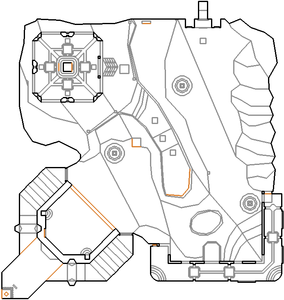 Map of Solstice
Letters in italics refer to marked spots on the map. Sector, thing, and linedef numbers in boldface are secrets which count toward the end-of-level tally.

Kill the imps and zombieman and/or shotgun guy then climb up either staircase to get outside and face more zombies. Look north to see a lift next to a metal pole and ride it up to a ledge with imps, then turn right and follow the ledge round until you reach a satyr switch guarded by a spectre (plus a cacodemon on Ultra-Violence (UV) and Nightmare (NM) skill levels). Press the switch then look right to see that a set of stairs have risen below, drop down to ground level and climb the stairs to reach a lift that you can ride up to enter a gray building with zombiemen. Follow the passage round until you reach a switch which will raise a rock platform outside.

Follow the passage back round and enter an opening in the wall on your left (there is a plasma gun here on I'm Too Young To Die (ITYTD) and Hey Not Too Rough (HNTR) skill levels) then step across to the platform you just raised (collecting a super shotgun sitting on it) before running north-west to land on a gray ledge. Kill the imps that appear in front of you as you land then follow the ledge up to a metal structure and enter it using the staircase on the east side. Kill a Hell knight (or baron of Hell on Hurt Me Plenty (HMP) skill level or higher) waiting inside the structure and flip the switch it was guarding, then return to the south-west side of the canyon where a cavern has opened containing (depending on skill level) shotgun guys, arachnotrons, a knight or a baron. Take the rocket launcher in the cavern and press the lion switch next to it.

Go back outside to find that the canyon has darkened and one or more revenants have appeared overhead. Head to the north-east side of the canyon to confront an arch-vile as well as some spectres on HMP or higher. Retrace your steps to the metal structure in the north-west corner and go inside it to find that the central column has opened to reveal a lion switch - press it and kill the knights that appear around you, then return to the start point to find that a Plutonia-style teleporter has opened which you can step on to finish the level. Watch out for one or two mancubi waiting for you on the way back.

After riding the lift near the start of the level up, turn left to find a chaingun on ITYTD and HNTR.

* The vertex count without the effect of node building is 2249.