MAP13: Subverted Base is the thirteenth map of Scythe. It was designed by Erik Alm, and uses the music track "Agony Rhapsody" from TNT: Evilution. 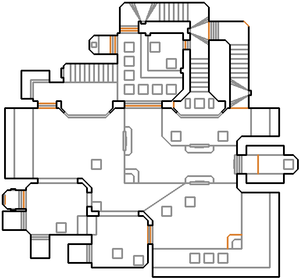 Map of Subverted Base
Letters in italics refer to marked spots on the map. Sector numbers in boldface are secrets which count toward the end-of-level tally.

Look out at the beginning, for when you attempt to cross through the ditch towards the outdoors two walls with shotgun guys will lower. Grab the chaingun, armor, berserk pack, and box of ammo and then head inside the building. Head straight across to the next door and follow this passage up the stairs until you find a megaarmor. Directly to the right of the megaarmor is a switch, so press it. Now run back a short ways through the passage through the open door; get there before it closes and you will be able to obtain the red keycard. Leave the passage returning to the entrance of the building, then climb the stairs and open the red door to head back outside onto solid ground. There might be some enemies teleporting here, but you will be able to see the blue keycard on the far side, next to the second building. Grab it, watching out for more monsters, and head back in the building you were previously in. Now find the blue door, and enter to find the yellow keycard. Return back outside heading towards the second building. Now open the yellow door and fend off the monsters as you reach the exit.

* The vertex count without the effect of node building is 592.