MAP13: Suicidal Tendencies (named "S.T." on the automap) is the thirteenth map of Alien Vendetta. It was designed by Brad Spencer and uses the music track "The Demons from Adrian's Pen" from Doom. 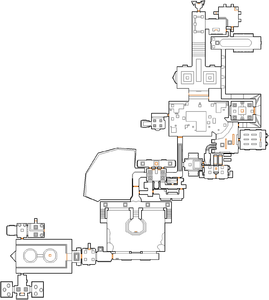 Map of Suicidal Tendencies
Letters in italics refer to marked spots on the map. Sector numbers in boldface are secrets which count toward the end-of-level tally.

This map houses armies of monsters, but, with the exception of the large courtyard containing two spider masterminds, this map is less about infighting and more about just grinding through the hordes. Ammo is abundant, but concentrated in a few areas, especially the shells.

The starting room has several zombiemen, but shooting them causes two rooms of shotgun guys to pour out. To get the super shotgun, use one of the gray panels nearby as a lift upwards. Now head east down the hallway. There are imps here, but also a room to the side with lots of zombies. There are two doors in this room. Enter the right one fending off spectres and other monsters until you find a switch on the wall. This reveals a plasma gun. Watch out for teleporting imps when you pick it up though.

There are two ways to reach the red keycard, which is in the cargo room to the north. The first is to return to the hallway and take the north door to the cargo room. It is recommended to do this as there are a number of monsters to kill here, including a cyberdemon. If you do not kill them they might pose a problem later on, as the key is on top of a crate which you have to cross to get to, and monsters could block you from reaching it. At the opposite end of the cargo room is a switch opening a garage door with several demons and mancubi. Go to the end of this hall and you should see the yellow exit door, plus a lot of imps to the room on the right.

The alternative way is to take the other door in the room with zombies. Head down the next hall to a blue-floored room overlooking the cargo room. You can use the computer panels for supplies if necessary, and there are two more doors. The one on the right leads to a room with several computers and a switch in the middle. This switch lowers the BFG9000 in the room behind the blue door. To get there, leave the room and then take the other door. This hallway is full of zombiemen, and the blue door is just in the hallway here. If you have the blue key from Secret #3 then open this door. Be warned however, as a lot of enemies will teleport in once you grab it. When that is done, continue down the zombiemen-filled hallway northward to another monster-filled room. A small hallway north leads to the same room with imps and the teleporters.

A desk near the computer panels holds a switch to press. Press it, and head to the nearby teleporters. If you grab the rocket launcher, imps will pour out from the teleporters. The teleporter to the left is one you can access, and it takes you on top of a big crate in the cargo room. Climb the crates towards the red keycard to pick it up. It is recommended to clear this room first before grabbing the key. Now head back to the very beginning of the map. The red door is through the west hallway. If you have the blue key, you can also head south through blue doors to find a lot of supplies. Through the red door is a roomful of mancubi dead ahead, and hallways with revenants to the sides. The room with the mancubi overlooks the courtyard here, where spider masterminds, chaingunners, and barons of Hell are abound. You need to press the switch in the room with the mancubi to open the room straight ahead. Do so and head out into the courtyard, through the newly-opened door and westward. Keep going westward until a room with nukage columns. There are demons on solid ground below, and Hell knights and spectres on your level. There are also two doors on the far sides. Take the northern door. In this room full of chaingunners, press the switch on the wall. This lowers several things, the wall directly behind you, the wall to your side revealing a teleporter, the two nukage columns, and the southern door. Do not take the teleporter yet, instead, go back to the room and take the southern door to the new room. Flip the switch in this room, and then return to the northern room, taking the teleporter to the middle of where the nukage columns were.

Picking up the yellow key on top of the nukage container in the south-west teleports in many arch-viles - grab the invulnerability sphere first. With the yellow key in hand, backtrack all the way to the northernmost portion of the level, to where the exit is, and open the yellow door to exit.

Suicidal Tendencies is also the name of a cross-over thrash/hardcore punk band from California.