MAP13: The Crypt (The Plutonia Experiment)

(Redirected from MAP13: The Crypt)

MAP13: The Crypt is the thirteenth map of The Plutonia Experiment. It was designed by Dario Casali and uses the music track "Donna To The Rescue" from Doom. 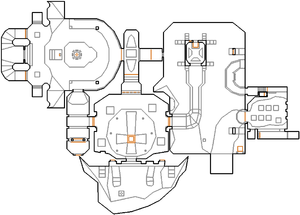 Map of The Crypt
Letters in italics refer to marked spots on the map. Sector, thing, and linedef numbers in boldface are secrets which count toward the end-of-level tally.

As soon as the level starts, take the super shotgun in front of the door to your left and use it to dispatch some lost souls, then press both of the large skull buttons on either side of the door to open it. You will see the yellow skull key on a step in front of you, initially guarded by a few imps; however, when you take the key the entrance door will shut and you will find yourself surrounded by (depending on skill level) four chaingunners, Hell knights or mancubi.

After killing the enemies, go through the east door to find yourself on a stone walkway. Follow it down past a couple of imps to a tower and step on the white teleporter pad ahead, which is actually a lift that will take you down to ground level; be sure to run forward as you step off as knights are waiting on either side to ambush you. Turn right (east) and step forward, and notice the wooden balcony to your right - if you go to the north-east side of this balcony you will find a hidden area behind it containing a baron of Hell.

Climb the ladder here to get on the balcony then turn left and head round to some steps that lead up to a pipe room with a blood pool. Kill the chaingunners that rise from the blood (plus an arch-vile on Ultra-Violence and Nightmare) then step across to the other side, go through a doorway and turn right to see a lever ahead. Throw it, kill two spectres that are released behind you then go back to the blood room and head west until you drop down a bloodfall and return to ground level. Turn left as soon as you land to see a teleporter in front of some blue skull bars and enter it; you will be sent to a tiny ledge with the blue skull key on it.

With the blue key, drop down to the ground and retrace your steps to the white teleporter lift you used earlier; press the nearby button to call it down then retrace your steps to the yellow key room and go through the west door this time. Turn left and open the blue key door in front of you to confront a baron (which will teleport behind you), press the button it was guarding then return to the previous room where the blue flags blocking the north doorway have lowered.

Kill one or two chaingunners ahead then go through the doorway on your left; be ready to fight as some revenants will be released behind you, and two marble walls will open ahead that conceal arch-viles on Hurt Me Plenty skill level or higher. Walk round the water pool in front of you to some wooden steps and go up them to find a rocket launcher in front of a button that will lower the bars around the exit teleporter. Pressing the button will release an arch-vile behind you, but you can often reach the exit teleporter before it has time to attack.