MAP13: The Sewers is the thirteenth map of Hacx. It was designed by Anthony Czerwonka (Adelusion). 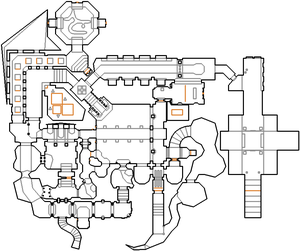 Map of The Sewers
Letters in italics refer to marked spots on the map. Sector, thing, and linedef numbers in boldface are secrets which count toward the end-of-level tally.

Take the vulcan rubber boots behind you, then go down the steps and head west at the junction to find a stone path guarded by one to four monstructs. Push past them to a cryogun (guarded by a mechamaniac on "I am immortal" skill level or higher) then run north and east across some square platforms which will fall into the lava below as you cross them. There is another monstruct at the end of the passage, replaced by two mechamaniacs on "Let's rip them apart!" (LRTA) or higher - kill them quickly then head north into the next chamber where one or two thorn things are protecting a photon 'zooka. Pull the switch on the north wall to open two compartments with androids (or terminatrixes on LRTA or higher), pull two more switches inside both compartments then head south to see that a portal has opened leading to some cartridges (the map's only secret).

Pull the switch here to lower a lift leading back up to the starting corridor, then head east and north to find thugs guarding an uzi, a kevlar vest and a valise. Go through the doorway and slay one or two terminatrixes on the bridge ahead, then flip the switch on the west wall to lower that bridge and get a stick. Kill one or two thorn things hiding behind the bridge before heading north-west to some steps guarded by a mechamaniac, then follow the path west, south and east past phages (along with more mechamaniacs on LRTA or higher) until you find yourself overlooking the bridge you lowered earlier. Pull the switch on the north wall to raise the bridge again, walk on to it then run south to leap down to the blue Z-key. Follow the ledge round until you see another small switch on your right, pull it to lower the bars ahead and get back to the bridge then head across it to a T-junction.

Look south to see a thug (or monstruct on LRTA or higher) at another junction, go west from that junction to collect a nuker then walk east to dispose of an android guarding a blue key door. Open the door and dispatch a buzzer (or stealth on LRTA) waiting behind it, head down the steps to enter a cavern with some phages (and mummies that turn into phages when shot) then head south past terminatrixes to a water stream which leads to a wooden dock. Climb the steps here to get the red Z-key, which will lower the wall in front of you, then head straight forward to another blue key door which has some androids waiting behind it. Press the hand scanner at the far end of the room (requiring the red key) to reveal a switch that will open some bars in the tunnel below, then head back to the bridge room and climb up the north-west stairs again before entering the doorway on your right to get into that tunnel. Grab the tazer here and destroy any approaching buzzers and androids, then head east until you drop into a flowing river that you can follow into a dark passage, where the level will end.

From the blue key, head south and west into a cavern with an android, then open the wooden doors to the north to find a super kevlar vest and an SI array.

* The vertex count without the effect of node building is 1909.