MAP13: The Wharf is the thirteenth map of Doom 2 the Way id Did. It was designed by Michael Fraize (Marcaek) in the style of Sandy Petersen. The par time defined in the DEHACKED lump is 1:45. 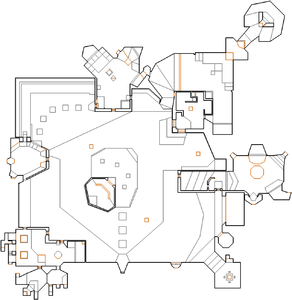 Map of The Wharf
Letters in italics refer to marked spots on the map. Sector, thing, and linedef numbers in boldface are secrets which count toward the end-of-level tally.

In the starting place, head left and enter the building of green brick. Push the red skull button. The platform to your left with shotgun guys will lower. Stand on this platform and wait until it rises for you enough to jump to the central red brick platform. Once you will be on it, press the gargoyle switch to lower northern platform. When you rise on it, walk upstairs and press the switch to reveal the northern area then go there. In the outside, drop down and enter the grey building. Inside, walk under the red lamp to build up the staircase nearby. Walk up (a trap will open as you do) and press the switch for another staircase. Walk up the other stairs. Jump over towards the throne with yellow key. Note another trap open behind you.

With the yellow key leave this grey building and drop down to the water. There are three teleporters to get to the central island. Use any one (the eastern one leads to secret#7). If you teleport to the starting position jump over the three pillars with health bonuses, then enter the yellow door. The walls will start lowering revealing the cyberdemon. He will also teleport right behind you. Inside, get the red key.

Having the red key drop down to the water and enter the tan building decorated with windows (north east). Inside, head right and then north to the dead end where there are red key bars and a Hell knight. Open the bars and press the button to temporarily open the door at the south of the room. Enter this door to find yourself in the dark tan room. Walk upstairs. You can see the blue key but note that should you grab it the platform will lower right into the trap. Grab the blue key, kill the monsters in the trap, rise back on the platform and notice the walls open in the south and west of the room. Go west and lower the platform. At the top press the red skull button to escape.

Drop down to the water and use any teleporter in the south or west to get to the place you have started the level (if you wish to use the eastern one, you can jump over on the three columns with health bonuses). In the starting place again, now head east. Open the blue bars and press the button. Note the green brick wall lowering. When it is down, walk downstairs and enter the lava teleporter for the end.

A dead lost soul (thing 70) for some reason is placed in the outside of the map and has no any skill flags, so it does not actually appear in the game (anyway, this cannot be seen even with any flag).

* The vertex count without the effect of node building is 937.