MAP13: Town of the Dead is the thirteenth map of Requiem. It was designed by Iikka Keränen and uses the music track "Lamneth's Ground" by David "Tolwyn" Shaw. It is also Keränen's most well-known Doom II level, due to the use of various then-unseen architectural tricks, the most famous of which were faked 3D bridges, including two bridges, one crossing over the other, above a river.

Town of the Dead was featured in Doomworld's Top 100 Most Memorable Maps, placing 77th. 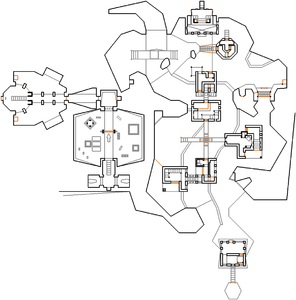 Map of Town of the Dead, cropped to only show the playable area
Letters in italics refer to marked spots on the map. Sector numbers in boldface are secrets which count toward the end-of-level tally.

Pick up the shotgun and kill the imps, then cross the bridge to the marble silo. Inside, grab the berserk pack and use the elevator switch to go downward. Open the door at the end here to return outside, then go around to the right where you will see a gate and a lift. Use the lift to go up, then cross the bridge that is over the gate to the next ledge to find a button. Press it then go back the way you came to ground floor. The gate should be open. Head through there, and you might find a mancubus on your right. If you go past him you will find the yellow door. Keep going south though, and you should find a lavish building. Go inside and to the right to find the blue keycard and then enter the blue door that is inside. Use the down switch on the elevator, then kill the mancubus that is guarding the yellow keycard. Grab it, then press the up switch on the elevator, then leave the lavish building.

Go back to the yellow door and open it. Inside, just head through the building, and you will be able to cross the first bridge of the "double bridges" to the other side. Head south and around the next building till you find the entrance, then head inside. Again, just go through the building, then cross to the other building. You will find a red door to the north of a fork, so head south and down to get the red keycard for it. Open the red door to cross the second bridge of the "double bridges" to the next building. There will be a Hell knight or a baron of Hell just behind it. Head downstairs and press the button to open a wall with cacodemons and an opening to cross to the next building. Head here and make a jump across the broken bridge at the top, then enter. Grab the soul sphere that was in the cage to the left, then use the down switch on the elevator to head down. Open the door and you will have a lavish building in front of you. Enter it killing the mancubus and revenants. In this building, you need to press two buttons to reveal a teleporter to the north, but you have to press both of them quickly before the teleporter is blocked. When you press them, you may have revenants (or imps) ambushing you as well. If you fail, try it again.

When you make it through the teleporter you will find yourself near a graveyard. Enter it to find some imps and some bigger monsters who do not move. The arrow on the ground points through a gate, towards some bars. Going through the gate opens those bars, but also releases the static monsters. Kill them and head through the bars, then go left and you will find the exit switch.

* The vertex count without the effect of node building is 1725.