MAP13: Traps of Torment is the thirteenth map of Whispers of Satan. It was designed by Paul Corfiatis, who also wrote the music track for this level, "Devil French". 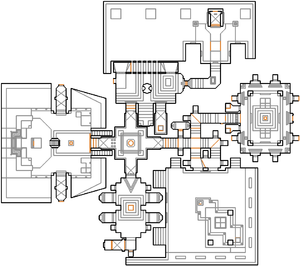 Map of Traps of Torment
Letters in italics refer to marked spots on the map. Sector, thing, and linedef numbers in boldface are secrets which count toward the end-of-level tally.

The lift you are on lowers at the start. Grab the chaingun in the next room and fight off imps as the bars ahead lower. Head into the four-way intersection and turn left. Open the door to the outdoor area with monsters. Grab the super shotgun and press the switch here. It opens up two side doors with monsters as well as the blue key. The two side rooms have switches on the end, these will allow you to head back into the four-way intersection. Grabbing the key triggers two closets with lost souls inside of them. When you are done, head back into the four-way intersection and go straight east to the blue door. Follow this path to the next door, but exercise caution as you do for closets open up as you are going and chaingunners are behind them. Flip the switch to lower the lift into a big room where the yellow key sits atop a pillar. The switch on the opposite end lowers the key for you to grab, but look out as chaingunners appear in eight surrounding closets when you grab the key. To leave this room, you need to press four switches in four of the cubby holes to open the bars. Do so and return to the four-way intersection, taking a right and going north through the yellow door. Open the door into the room and climb the stairs on the back side of this room. Hit the switch to open a door with a Hell knight and a teleporter. Take this teleporter, and hit the switch on the red key pillar to lower it, looking out for monsters who attack from behind. When they are taken care of, head back through the teleporter and open the red exit door. Kill the imps along the path and kill the mancubus inside the exit room, then exit.

* The vertex count without the effect of node building is 2317.