MAP13: Vesperas is the thirteenth map of PlayStation Final Doom, and the thirteenth and final map of the Master Levels episode. It is based on the PC version of MAP09: Vesperas from the Master Levels for Doom II, with modifications to accommodate the PlayStation's framerate and memory limitations and add enhancements such as colored lighting. It uses the music track "Sanity's Edge".

The author of the original level was John Anderson (Dr. Sleep). Changes for the PlayStation port were authored by Tim Heydelaar.[1]

After completing this level, the player is congratulated for beating "the most vicious realms that the demented minds of our designers could devise", before being sent to the first level of the TNT episode, MAP14: System Control. 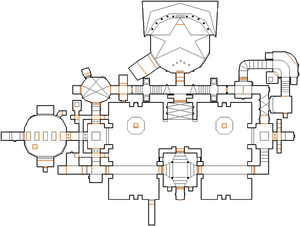 Map of Vesperas
Letters in italics refer to marked spots on the map. Sector, thing, and linedef numbers in boldface are secrets which count toward the end-of-level tally.

In the starting room, open the west door and follow the brick path west to a wooden door. Instead of opening this door, enter the small alcove to the north and press use on the metal wall to lower a lift. Follow the corridor west and north, then west through a pair of bars to an outdoor area with sludge. Run across the platforms to the opposite side of the pit, kill the enemies that appear in front of you, then drop into the sludge and enter the teleporter to get back up to the room entrance. Walk carefully along the narrow ledge on the south-east wall until you reach an open alcove containing monsters. Press the lit switch in front of you to reveal the yellow keycard and take it.

Return to the previous room and head north through some yellow bars, dropping into a room with star-shaped lights. Go east to exit the room; the wall behind you will lower to reveal the red keycard on a raised platform. Approach the yellow bars to the east and the floor below you will drop - kill the enemy that tries to ambush you from the north, then press the switch on the south wall. This will temporarily lower the ledge with the red keycard; go west and take it before the ledge rises again.

Go east through the switch and yellow bars and climb the staircase. At the top, go north and open the red door, dropping into a large chamber with a star-shaped floor. Press the switch by the south wall to lower the ledge with the blue keycard, then go north and pick it up. Some bars will rise in front of the lift; ignore them and activate the lift in the south wall so you can leave the room.

Return to the starting room and open the blue door, then press the switch behind it to finish the level.