MAP13: Viral Implant is the thirteenth map of Community Chest 4. It was designed by James Cresswell (Phobus) and uses a MIDI of "Aquilla 303" from Need for Speed III: Hot Pursuit sequenced by Rapidkirby3k. It is based on the layout of MAP01: Sector Limits from Virus, a game made by Cresswell using the ZDoom engine, but the gameplay has been changed to fit into Doom II. 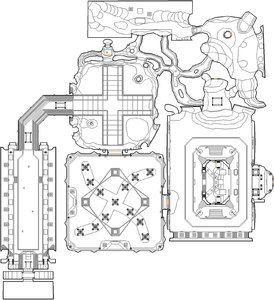 Map of Viral Implant
Letters in italics refer to marked spots on the map. Sector, thing, and linedef numbers in boldface are secrets which count toward the end-of-level tally.

This map is relatively simple, but deadly. Bear in mind that there are no monsters weaker than a spectre in the level. Neither are there any stimpacks or medikits in this level - all you get are soulspheres, megaarmors and berserk packs.

You begin in a long rectangular outdoor area. Grab the rocket launcher and plasma gun - you'll need both of them. Move forward and grab the backpacks, bulk cells and boxes of rockets near the corpses. Your first opposition is two arachnotrons, up to six revenants in the distance, and two cacodemons (four on Ultra-Violence and above). With all the space available this shouldn't be a problem, except for revenant homing rockets. Once you have cleared out the area, continue north into the corridor.

Save the berserk pack at the start of the corridor for later. The corridor will take a bend, leading into a pack of up to four mancubi. Weave around them into the next area, which has a mancubus (not on Hey, not too rough and below) in the southwest, two arachnotrons (four on Ultra-Violence and above) in the east, and most importantly, a spiderdemon in the south. Your goal is simple - provoke the spiderdemon into monster infighting by directing its super-chaingun at various enemies. If your health falls to dangerous levels, get the berserk pack back in the corridor first, then the soulsphere.

Open the door in the south of this area (you have to press on the wooden part) to enter a room with a four-armed structure. You will have to deal with a Hell knight on each arm, arachnotrons in structures in the north and south, mancubi in structures in the east and west, and two platforms with two cacodemons and a revenant (Ultra-Violence and above only) in the west and south. Take the chance to clear out this room and obtain more rockets, cells, a soulsphere and a fresh megaarmor before heading out through the eastern door.

While evading all that fire, your task is to get into the central structure. However, before doing that, you should ensure that one of the cages has been emptied of its monster. Climb up to it using the steps in the north or south, then circle around to the west side of the structure. Inside, you can take out the two mancubi, two Hell knights and two revenants (not on Hey, not too rough and below), clearing the way for you to proceed. When ready, head to the platform in either the north or south of this room (where the Hell knights stood on). Flip a nearby lion switch and ride the platform up. Use the steps near the middle of the structure to climb onto a mancubus perch. Face east and run. You should run on the top of the blocks, land in one of the enclosures and run onto the ledge with the exit switch. Flip this switch to end the level.

Get a soulsphere and megaarmor at the starting area

To grab a soulsphere and megaarmor at the starting area, drop down into each of the two water channels in the first area, then go to its northernmost part. Head around a metal pillar to find a soulsphere (east channel) or megaarmor (west channel).

* The vertex count without the effect of node building is 5777.