MAP13: Welcome to the Machine is the thirteenth map of Community Chest 3. It was designed by Thomas van der Velden, and uses the music track "Double, Double, Toil and Trouble" from Blood. 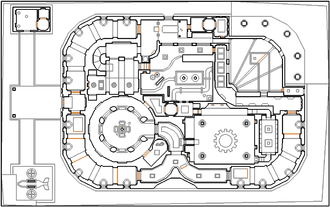 Map of Welcome to the Machine
Letters in italics refer to marked spots on the map. Sector, thing, and linedef numbers in boldface are secrets which count toward the end-of-level tally.

* The vertex count without the effect of node building is 3003. 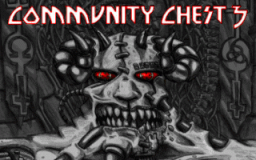 The stylized "CC3" seen on the monitor that opens secret #1, and in secret #4, reflects the author's original title screen and logo design for the project, pictured to the right. It was posted on the Community Chest forum on June 28, 2007. Daniel Gimmer (Tormentor667), expressing dislike for the design because it looked "too plain and too simple," created his own title screen and posted it on June 30, 2007. After a lengthy discussion, Andy opened a poll to choose which title screen would be used the same day. On July 13, 2007, Gimmer's design won by popular vote. Gimmer would go on to create the intermission, credits, and cast sequence graphics at the request of Eric Baker (The Green Herring), the compiler.

The choice of music in this level was made by Andy Leaver. The original submission did not contain custom music.