MAP13: Workin' on the Chain Gang is the thirteenth map of 1 Monster. It was designed by Ronald Lubbelinkhof (Dutch Devil) with later edits by Robert Eckhardt (Ichor), and uses the song "Dark Halls" from Doom.

Like all maps in the megawad, the map features only one type of monster, in this case the heavy weapon dude. It is set in an elaborately detailed UAC facility. 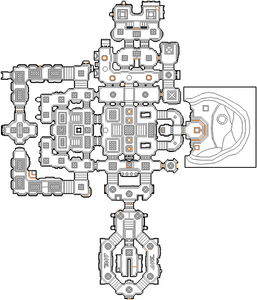 Map of Workin' on the Chain Gang
Letters in italics refer to marked spots on the map. Sector, thing, and linedef numbers in boldface are secrets which count toward the end-of-level tally.

Ammo and health are scarce on this map, and the enemies are deadly, so it is imperative that you move carefully and avoid staying in the open while there are enemies nearby. Preferably hide behind corners and kill the monsters as they come.

Go back to the hub area, head to the southern part (near the blue bars) and walk west, to the end of the balcony where you will find the red key switch. Press it to open the red key doors. Head inside, press the switch at the west end of the room, get the blue key and go back up. Head back to the corridor at the beginning of the level; the blue key switch can be found there. Press it to raise the blue bars.

Head through where the bars were, and go south, then open the big door. Press the switch at the south end of this room to open a door near the room's entrance. Behind it is the yellow key. Grab it, leave the room, and open the yellow key door opposite of where the blue bars were. Inside is the exit switch.

* The vertex count without the effect of node building is 8745.