MAP13 is the thirteenth map of 2 Sectors. It was designed by XIX IX VII XIII I. 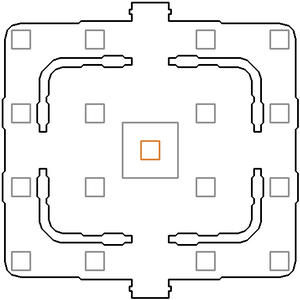 Map of MAP13
Letters in italics refer to marked spots on the map. Sector, thing, and linedef numbers in boldface are secrets which count toward the end-of-level tally.

To exit the level you must step into the middle of the brown pad in front of you, which has four Hell knights on it; they cannot step off the pad so you must clear a way past them. A revenant will approach from the opposite end of the room as the level starts - if you do nothing then it should launch a fireball and provoke one or more of the knights for you. Use the berserk pack in front of you to restore lost health.

* The vertex count without the effect of node building is 292.