MAP14: And All That Could Have Been is the fourteenth map of Plutonia 1024: The Plutinya Experiment. It was designed by Justin Kelly (Breezeep) and Michael Fraize (Marcaek), and uses the music track "U R my NME" by Darkwave0000 from Plutonia: Revisited Community Project. The par time defined in MAPINFO is 2:30. 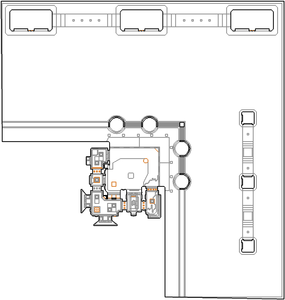 Map of And All That Could Have Been
Letters in italics refer to marked spots on the map. Sector, thing, and linedef numbers in boldface are secrets which count toward the end-of-level tally.

As you step off the teleporter pad, some bars will lower and close off a doorway to the north; an arch-vile will then appear behind the bars, before teleporting away once you awaken it. Flip the switch in the south-east corner of the room to lower two lifts with a backpack, a super shotgun and a box of shotgun shells; stepping on either lift will open the bars, and if you ride the lifts up you will find a megaarmor (which is the level's only secret). Go back down and head north until you get to the north-west corner of the map and kill a chaingunner that teleports to the ledge here, then run east towards a satyr switch guarded by a mancubus. Pressing the switch will lower a pillar behind you holding the yellow skull key and allow imps and demons to teleport in; when you collect the yellow key, some more mancubi will also appear above the outside wall.

Go back to the north-west corner and open the yellow bars here, then push past some imps and chaingunners to get back to the starting point. Open another set of yellow bars to the east and walk through them, then press the satyr switch on your left - this will lower the red skull key in the north-east corner of the level, but will also cause the arch-vile from earlier to teleport to the starting room. Kill it along with the imps and chaingunners that teleport there as well, then make your way back to the north-east corner and fight your way past some cacodemons to get to the red key (you can make this easier by getting the rocket launcher that has lowered by the west doorway).

From the red key, head south to some red bars and open them to reach the blue key - taking it will cause imps and demons to teleport from the north, and revenants and another arch-vile will appear in the starting room. Head back to the starting point and open the blue banner opposite the entrance teleporter to reveal another satyr switch, press it then step on the entrance teleporter to end the level.

* The vertex count without the effect of node building is 1886.

Stepping on the diamond in the middle of the entrance teleporter activates a conveyor belt that pushes a voodoo doll over a "W1 Exit Level" line. The doll can only cross this line once the sector behind it has lowered, which occurs after you press the switch behind the blue banner.