MAP14: Aquaduct [sic] is the fourteenth level of Memento Mori. It was designed by Tom Mustaine, and uses the music track "Gerbert" by Mark Klem. 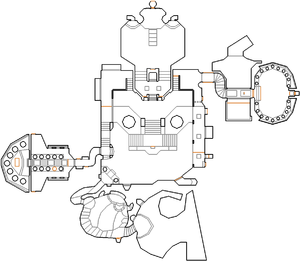 Map of Aquaduct
Letters in italics refer to marked spots on the map. Sector, thing, and linedef numbers in boldface are secrets which count toward the end-of-level tally.

Grab the supplies and head into the cave watching out for monsters to the right. If you are playing in single player, make sure you grab the chaingun in the niche here. Keep going through the cave into the large open area. Climb the first set of stairs to the switch and press it. Run as fast as you can up the next set of steps and go for the left stair set next to the red door. From there, run down the steps to the door before it closes. In the next hallway, head to the next door and press the switch next to it to open it. In the hallway with columns, head down both side paths and press the switches to lower the walls in the middle. Grab the blue skull key, and look out for teleporting monsters as you head back. Press the other switch in the hallway to return to the big area, then head through the blue door which is to the right of the red door. Here, you will see red bars to the east, so go down the passage left of it upstairs to the next door. Enter the next room, but turn around as a switch appears behind you. Hit it to lower the red skull key platform, but look out for more teleporting enemies in the area. Return to the red bars you saw and press the switch next to them to open them. Now, if you grabbed the chaingun in the niche earlier, there will be a nearby switch which opens the red door at the top of the stairs. If you did not get the chaingun, get it now, because the switch will be in a further position closer to the plasma gun, and the door does not stay open long. Press the switch and run through the red door before it closes to be in the final area. Here, a cyberdemon guards the exit along with an arachnotron and cacodemons. Kill them, then flip the switch opposite of the cyberdemon platform to get some stairs to the exit door.

The switch that lowers the red key pedestal can be triggered before it is raised. Stand below the center of the eastern skylight in the hall before the red key room, and flip the switch from the east.

* The vertex count without the effect of node building is 1472.