MAP14: Asphalt Jungle Breakdown is the fourteenth map of 2048 Unleashed. It was designed by Walter Confalonieri (daimon) and uses the music track ""The Dave D. Taylor Blues" by Robert Prince. 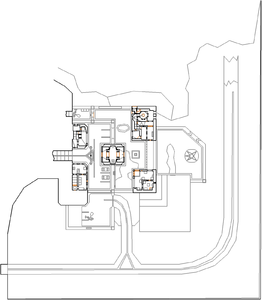 Map of Asphalt Jungle Breakdown
Letters in italics refer to marked spots on the map. Sector, thing, and linedef numbers in boldface are secrets which count toward the end-of-level tally.

Kill the zombiemen in front of you then step on the lift on your left to go down to a chamber with two shotgun guys. Open the door and kill the monsters waiting ahead then go through and turn left to see three zombiemen guarding a tan door. Go through this door and kill five shotgun guys waiting behind it, then go through the next door on your right to enter a chamber with a chaingunner and a Hell knight. Past the knight is a staircase with imps that leads up to a switch, which is guarded by another knight on Hurt Me Plenty (HMP) skill level or an arch-vile on Ultra-Violence (UV) and Nightmare (NM). Flip the switch and go back outside to confront some more shotgun guys (plus demons on HMP or higher) then enter the north-west building which is now open.

Kill two chaingunners waiting inside the building then go up the steps. The room at the top of the steps has a knight waiting on the right, and a baron of Hell will be revealed on the left as you enter - to avoid being trapped, alert the baron first and kill it from the stairs then enter the room to dispose of the knight. Press the switch that the baron was guarding to lower a platform on your left holding the red skull key, pick it up then return to the start point and step on the east lift to be carried down to another chamber with two shotgun guys and a red key door. Beyond the door is an area with various monsters including knights, demons and an arachnotron - go through the door and turn right to find a lift blocked by red skull bars, press on the bars to open them then ride the lift up to a storage room where the exit door is located.

Take the chaingun in the south-east corner if needed then go through the north-east archway to confront some imps (and two knights on HMP or higher) which are guarding a supercharge. Open the door at the other end of the walkway to face two imps then go through the next door and turn left to kill an arch-vile which is guarding a switch that will open some bars behind you. Go through the bars and turn left to head through an octagonal room guarded by shotgun guys, then turn left and head up some steps to a chamber with two chaingunners. Open the door in the south-west corner, kill a waiting baron on UV and NM then press the recessed switch in the north wall to open the exit door. Return to the south-east building and walk through the now-open exit door, kill a baron that appears in front of you then step on the Plutonia-style teleporter to finish the level.

The north-east building has a window that you can step out of (an arrow recessed into the floor will indicate the correct window after you press the switch to open the exit door). Stepping out of the window will cause some imps to appear on the outer walls of the compound.

* The vertex count without the effect of node building is 1853.