MAP14: Astral Nausea is the fourteenth level of 50 Shades of Graytall. It was designed by Darryl Steffen (dobu gabu maru) and uses the MIDI-rendition of the music track "The Fall of Zeal" from Chrono Trigger. The level is made of six separate areas that must be completed gradually without returning back, requiring the player to take a challenge. Each area (except for the first and last ones) has a design of contrast between shadows and spiral forms.

Dark blue floor (CEIL4_1) was chosen as a preferred flat texture for this map, and seems to be weakly noticeable. 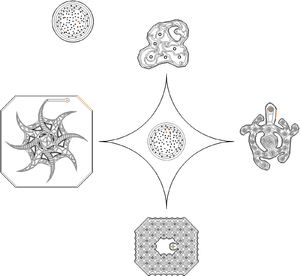 Map of Astral Nausea
Letters in italics refer to marked spots on the map. Sector, thing, and linedef numbers in boldface are secrets which count toward the end-of-level tally.

The first room is simple. Find the rocket launcher and the green pillar with beating heart. Push it by pressing use, and you will be brought to the second area.

Again, find another green pillar with a beating heart located in the north east of this area (use the automap to navigate properly). Unless you want to cleanup this area and find useful items, such as megaarmor and super shotgun, you need to push the green pillar by pressing use.

In the third area, take the megasphere and turn right. There is another green pillar but you need to fight barons first. It will bring you to the fourth area.

In the fourth area, there is a kind of forest-like area full of weak enemies, such as imps and former humans, but revenants are also here. Find a green pillar with a beating heart by enering the central "building" from the east. As an award take the plasma rifle. Push the pillar.

The fifth area is hardest, as it has a spiderdemon. You need to destroy it and step on its gibs. Doing so will unlock the exit. Fight all the enemies here, including arachnotrons and mancubi. After, go to the north of this area (use the automap for proper navigation) where you can see gibs to the right. Go to the right (all other areas here seem to have an invisible barrier) and you will see another green pillar with blue torches.

The final area is the same as the very first. Lost in the "forest" made of DOORTRAK find a red skull pillar to push it, which will be your finish.

* The vertex count without the effect of node building is 9751.