MAP14: Basefree is the fourteenth map of 32 in 24, a deathmatch megawad. It was designed by Sarah Mancuso (esselfortium) and uses the music track "Deep into the Code," originally composed by Robert Prince for Doom.

It was the seventeenth submission to the project, arriving fourteen and a half hours into the session, exactly half an hour after MAP13. According to Mancuso, it took 3-4 hours to build. It was her second map for the project, following Dropp. 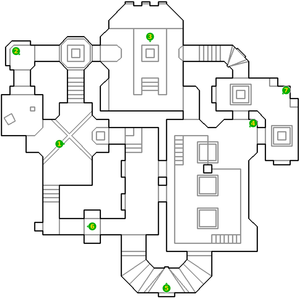 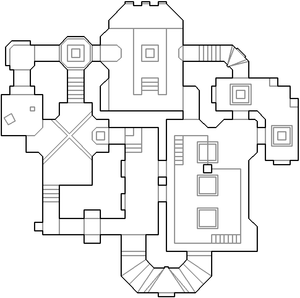 Basefree is a moderately-sized techbase, consisting of three main areas connected by hallways. One of these areas is a small outdoor section in the west of the map. Here players can find a chaingun, although players can also obtain a weapon from any of the four entrances to this area: super shotguns from the southern staircase and north-west balcony, a rocket launcher from the east balcony, and another chaingun from the north staircase. The chaingun in the outdoor area itself is more for the benefit of a player who spawns there.

The second main area is at the north of the map. In its centre is a large raised platform with a plasma gun. This room can be entered from the west via a passage connecting it to the outdoor area, from a short passage to the east which also contains a super shotgun and leads to a 7-shaped area which in turn connects to the third main area, and also from the south-east, where it connects directly to the third main area.

The third main area features a large nukage pit that deals 5 damage before armor. Two sets of stairs, in the north-west and south-east corners of the pit allow players to escape.

Ammo is plentiful in this map; most weapons will have their corresponding large ammo pickups fairly close by. However, the map contains no health or armor pickups of any kind.

* The vertex count without the effect of node building is 480.