MAP14: Blazing Boulevard is the fourteenth map of Ancient Aliens. It was designed by Paul DeBruyne (skillsaw) and uses the music track "Moonwalk," composed by Stuart Rynn (stewboy). The par time is 6:00. 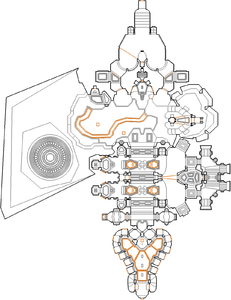 Map of Blazing Boulevard
Letters in italics refer to marked spots on the map. Sector, thing, and linedef numbers in boldface are secrets which count toward the end-of-level tally.

First, deal with the stealth plasma aliens that are in the initial area. Grab all the weapons, a combat armor, and a berserk, then hit the switch and head up the elevator. Some cacodemons, alien guardians, shotgunners, and chaingunners are here, so kill them and hit the switch in the closet to the south to raise some light bridges to the other side. Attempting to grab the Plasma gun and bulk cells will trigger a drop in the floor and instigate some mancubi, imps, an arachnotron, and an archvile. Head around the corner and press the switch in the back of the room to open up the whole area.

From here, head south into a room with monsters visible through the floor, including two barons of Hell. The switch in the back will drop the floor down to give you access to a lift to either side. Take it up, then press the switch and run across the lowered pillars to the blue key. The teleporter will take you back to the main area. The blue door is to your left, and the switch inside will lower a wall with two archviles in front of you (they will teleport into the main area when provoked) and some revenants in the room across from the blue door. The switch also opened the area to the north, so go there.

Drop down to the eastern platform and hit the switch at the top of the stairs. This will raise you up into a chaingunner ambush, but will give you access to a switch you couldn't reach on the other side of the lift. Drop down and hit this to raise the lightbridge on the other side of the pit. Cross the bridge and head into the teleporter to find yourself on a nearby balcony that had an arachnotron on it. Entering this arena will reveal a bunch of imps and a spider mastermind. Behind the spider mastermind is a switch that reveals a bunch of stealth plasma aliens. Head to the other side of where you came in and drop down off of the balcony. The door to the exit is here.

The elevator at the start has decorative textures on the sides marked with actions different from the switch in the middle. Pressing these sides makes the lift rise faster than pressing the switch texture.

* The vertex count without the effect of node building is 6087.