MAP14: Charon Eclipse is the fourteenth map of Plutonia 2. It was designed by Alexander S. (Eternal), and uses the music track "Sam's the Man" by Jamie Robertson. The par time defined in MAPINFO is 2:30. 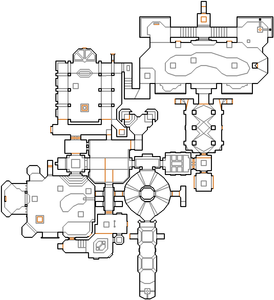 Map of Charon Eclipse
Letters in italics refer to marked spots on the map. Sector, thing, and linedef numbers in boldface are secrets which count toward the end-of-level tally.

Go forward and pick up the super shotgun, killing the Hell knights nearby. Then press the skull switch in the left alcove to open the next door. Inside the circular hall that follows, kill the enemies, and where the demons are, there is a fork. Move left, and at the bridge, keep going straight. Yet another fork is over here. The red key is to the left, but it is not accessible at the moment. Open the door on the right and kill all of the monsters in this area. The switch in the back lowers the yellow skull key in the blood moat. An arch-vile and two cacodemons will pop up when you collect the key. Now go back to the T-shaped bridge and head south to the hall. Open the door and kill the enemies in the small room, but be very mindful about the ambush that springs up abruptly in the room as well. Head for the door to the west, and you will be on a ledge in the red key area. There is a yellow switch to the right, press it, and the arachnotron pen to the west will be open, where another switch is. Press this one to lower the key and several monster pens. Upon picking up the key, demons will spawn into the blood moat, while other monsters will be roaming elsewhere in the map.

Kill anything that stands in your way as you head back to the first fork (which was just after the circular walkway) and then go east. Two shotgun guys are hiding just before the red door, and three chaingunners are behind that door. Past the red door, take the north door and kill the enemies in this hall. There are two switches tucked away in the northern corners. Press both of them for the northern wall to lower. Step on the platform that is available to head down, ready to fight a few mancubi. In this open field, turn right and head behind the column for a switch. Press it to make the door to the north open, where you will have to fight a cyberdemon, while chaingunners teleport in. Walk up the stairs going left for one final switch, which lowers the exit on the right side. Arch-viles and chaingunner will attempt to stop you from reaching it.