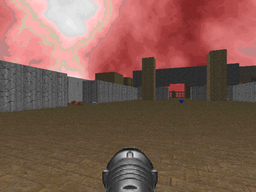 MAP14: City in the Clouds, designed by Yonatan Donner, is the fourteenth map of Hell Revealed. It uses the music track "Excalibur" from Rise of the Triad.

A very tough city level. This level is special in several ways. First of all, I dreamt it. Yes, some parts of this level appeared in my dream and I built them accordingly - only that in my dream, I think I had godmode on :-) The city is floating - you can watch behind the fence, and you'll see the sky. In this area, disconnected from the rest of the world, you will have to pass several guardians to leave, and don't expect an easy fight! My dreams are not friendly! :-) 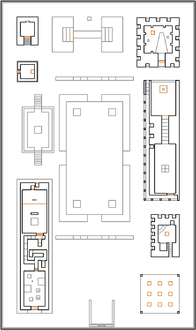 Map of City in the Clouds
Letters in italics refer to marked spots on the map. Sector, thing, and linedef numbers in boldface are secrets which count toward the end-of-level tally.

It is obvious that this level was designed to be played from a pistol start, and when done so is easily one of the hardest maps of the WAD. The main problem is that every weapon is fiercely defended:

The shotgun is guarded by imps and a baron of Hell, and two arch-viles and several Hell knights appear when you grab it.
The rocket launcher is only guarded by imps and demons, but when you grab it the door closes behind you and an army of cacodemons teleport in up close and personal.
The chaingun is guarded by a cyberdemon and multiple arch-viles and Hell knights.
All other weapons require first getting the blue key, which is right next to the chaingun.

Surviving the level, especially when going for 100% kills, thus requires very careful planning to survive while building up your arsenal. Here is one approach. Remember that you have a megasphere and an invincibility that you can use anytime you see fit, with a second megasphere available after the south-west building.

* The vertex count without the effect of node building is 1035.