MAP14: Dog Eat Dog is the fourteenth map of Kama Sutra. It was designed by Adolf Vojta and uses the track "CCCool" from Rise of the Triad by Lee Jackson, which is also used in MAP06: Research Complex.

I wanted to have some map with some big height differences, so... this one grew up. I surely had to reduce design and light effects so the main thing here to aim at was some good gameplay. I hope it turned out well.. 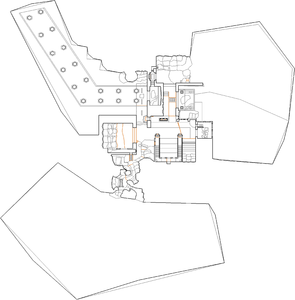 Map of Dog Eat Dog
Letters in italics refer to marked spots on the map. Sector numbers in boldface are secrets which count toward the end-of-level tally.

* The vertex count without the effect of node building is 2005.