MAP14: Downriver is the fourteenth map of Community Chest 4. It was designed by Eli Cohen (ProcessingControl) and uses "Anchor," a music track composed by Mark Klem for Memento Mori II. 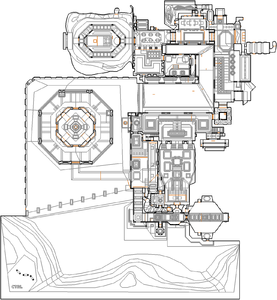 Map of Downriver
Letters in italics refer to marked spots on the map. Sector, thing, and linedef numbers in boldface are secrets which count toward the end-of-level tally.

Most of Downriver's action takes place along a "2"-shaped axis of hallways, which you have to traverse up and down thrice. With every pass, the corridors refill with enemies. From a pistol start, you do get a rocket launcher and a good amount of rockets. However, going trigger-happy with rockets may not always be the best idea, as splash damage is something you have to bear in mind within this map's rather tight confines.

Completion of the map requires obtaining the blue key, then the red key, followed by the yellow key.

You begin on a raised ledge in a grey brick room. As soon as the map begins, the two large metal pillars ahead will begin lowering, revealing some strong enemies (two Hell knights on Hey, not too rough and below; one mancubus on Hurt me plenty; two mancubi on Ultra-Violence and above.) Grab the four boxes of rockets to the right, then dash forward and use the green pillar. It will slowly lower, revealing a rocket launcher. Again, quickly dash forward, grab the rocket launcher, then retreat to the ledge to blow up the enemies. Once this is done, get off the ledge and head through the door next to the left metal pillar.

In this next room ("red door room"), there are up to six imps beyond the four pillars in this room. Blow them up with your rocket launcher - no big deal. As you head past the pillars, face backwards (south). The walls in the south of the room will open, revealing up to three arachnotrons. This room has the red door in the northwest, so remember that for later. if playing from a pistol start, flip the switch in the north to lower a chainsaw, which may come in handy for close quarters situations.

Once the room is clear, head through the door in the east. This takes you to a darker hall with windows overlooking a river ("revenant hall"). As you enter the room, an invisible ledge lowers, releasing up to six revenants into the room. You also have to deal with up to six imps in a long cage to the left (north), and up to two cacodemons that will approach from the windows. Pull back into the previous room if you need space to dodge homing missiles. This hall does contain some delayed ambushes, so be careful when you have to pass through here again later.

Continue east. You will now be in a much taller hall with high ledges ("ledge hall"). Part of this hallway splits into a lower, accessible ledge and a flight of steps going down. Kill the arachnotron on the ledge directly in front of you. Next, clear out the revenants on the ledge to the southeast, as well as the horde of imps on the steps going down. You may also wish to clear out the arachnotron on the lower ledge (not present on Hey, not too rough and below), which is guarding some boxes of rockets. Once done, head down the steps. There are two mancubi waiting at the bottom near the door - you might wish to pull them out to the steps so that there is space for you to use your rocket launcher.

At the bottom of the steps, switch to a close range weapon, and open the door ahead. This leads to a square area with a spiral staircase. There are three imps on the way down - no big deal. Open the door at the bottom of the spiral staircase, which leads to a hall with blue and red inlays ("red/blue hall"). In front of you are up to six imps, but the real danger is the mancubus just left of the door as you enter. About 1/3 of the way down the hall, an invisible tripwire causes a shutter at the end of the hall to open, revealing a platform with an arachnotron. Dispose of it with more rockets.

At this point, you probably should make a detour for a chaingun. From the middle of the red/blue hall, head south. Kill the arachnotron on the platform, dash up onto its platform and grab the chaingun (and two boxes of ammo. You do need to be careful of an imp cage on the right (west) wall, as well as a thin window right (west) of the chaingun platform where an arch-vile can launch attacks at you. It is well advised to clear them all out now, as you will be visiting these areas later.

Head to the arachnotron platform at the west of the red/blue hall, and get up on it using the steps. From there, proceed south into yet another hall ("shutter hall"). This one is blocked off at the end by a lowered shutter. Grab the super shotgun here. Kill the three imps and arachnotron ahead. As you continue down the metal steps, up to three revenants appear on the ledge to the east. Get up to their ledge using the nearby steps. On the southwest of this ledge is a patch of brown wall, in front of which are lights on the floor. Open it, and you will find yourself in the imp cage overlooking the chaingun area. Head to the south of this cage and step into the alcove with the armor bonus. This alcove lowers you into a new room, where the arch-vile overlooking the chaingun area was. Head to the southwest of this room and flip the switch.

Backtrack to the shutter hall (quickly, as up to four cacodemons have been released in the chaingun area). The door in the southwest leading to a bridge is open. Head along the bridge to enter an octagonal building. Access to the central structure of this building requires the blue key, which you don't have yet. Clear the central ledge of the eight mancubi. head up onto the ledge and flip the four switches (one in each of NE, NW, SE, SW sides of the central structure), then head back to the shutter hall.

Head back to the shutter hall. A trap has opened near the steps leading up to the ledge, with three revenants. Take them out. Again, head along the bridge and into the octagonal building. Use any of the blue doors to head into the central structure of the octagonal building. It is completely quiet inside, with the red key in the middle. Any half-skilled player would have their "trap" alarms going off at full volume right now. Equip the super shotgun, jump down and grab the red key. Four nearby pillars raise, revealing four Hell knights. Weave around them and blast them at point blank range.

Ride any of the platforms in this area back up, and backtrack to the shutter hall. At this point, you might notice about five revenants (and four cacodemons) in the shutter hall heading for you. This is because collecting the red key has opened up a large number of traps in the level. As you make the trek back to the red door near the start of the level, these are the traps that you will encounter:

You now need to retrace your steps all the way to the shutter hall. Again, grabbing the yellow key opened a new host of traps. In order:

The shutter at the end of the shutter hall is now open. Up to three revenants will approach. Grab the armor if needed and head down the hallway. Step on the square with the armor bonus to be lowered into the exit corridor. Watch for the three imps high on a ledge to the right, and a mancubus dead ahead (Ultra-Violence and above only). Open the exit door, prepare your rocket launcher and step onto the bridge leading to the exit switch.

About one third of the way along the bridge, the sides of the bridge suddenly sink into the lava. Alcoves open on either side of the bridge, revealing up to ten Hell knights. If you want to get out of this one unscathed, you'll need to unleash skills normally meant for another genre of video game - bullet hell. Try to clear out one alcove as soon as possible, before dealing with the other alcove.

Inside of Secret #16, there is a misalignment on the western wall. If you shoot this misalignment, a door opens up into an easter egg room with an image of a human chest as well as the words "IT'S A CHEST!!!".

* The vertex count without the effect of node building is 10415.

At certain points in this map, enemies suddenly lower from the ceiling to the floor before being unleashed upon the player. This is achieved using Boom's "draw fake ceiling and floor" (action 242).

When the player crosses the trigger line, the raised sector is lowered normally with one of Boom's generalised floor actions. The monsters ride the lowering invisble sector down, thus appearing to be lowered from the ceiling.

The area beyond secret 11 requires a switch to be pressed three times in order to "deliver" an armor to an alcove. This uses a voodoo doll on a scrolling sector.

This level was originally titled Mill Assault. On June 27, 2011, Cohen renamed it to The Falls of Doom. On June 18, 2012, he changed it again to its final title, Downriver.