MAP14: Eye of the Storm is the fourteenth map of Doom 64, designed by Danny Lewis. The level introduces arachnotrons in a regular level setting (arachnotrons appear in MAP32: Hectic and MAP30: The Lair, which in all chronological fairness the player goes through before entering this stage), and the level has a storm sky animation considering its title. It uses the music track "Chrystalline Chaos". The level itself is a large castle surrounded by a moat which is filled with demons and zombies. 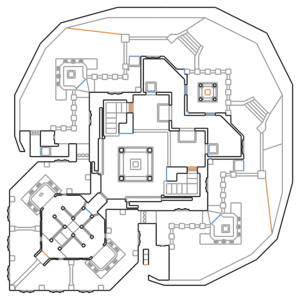 Map of Eye Of The Storm
Letters in italics refer to marked spots on the map. Sector and Thing numbers in boldface are secrets which count toward the end-of-level tally.

Player starts off in a flooded moat surrounding a very large fortress-like complex. Directly in front of him are three sergeants who are unaware of your presence. Kill them, then go either left or right. (Note: the sergeants are actually called shotgun guys in D64, but for simplicity's sake, they will be referenced as sergeants here).

Going left will take you to a couple of arachnotrons and a baron who are gunning for you. Going further left to the end of the moat, you will find another baron and some health and ammo. Up the left set of stairs, behind the crenellations, are some imps and a cacodemon at the far end in front of some columns blocking the next section of the map near a switch that can only be activated with the blue skull key that will drop them. Also, at the corner guard tower sits a glowing yellow stone block. As you head back toward the stairs back down into the moat, a stone block in the far corner momentarily retracts into the floor with just enough time for you to get on top of it and activate the switch. This causes the yellow block to retract into the tower and partially rise up with a rocket launcher.

Going right, the architecture is nearly symmetrical to the left side with the same set of monsters lying in wait in the same positions as the right side, but with the addition of a pack of pinkies. After all those monsters are killed, the blue skull key will be lowered into the moat for you to pick up, and a flock of lost souls will also appear and attack. Additionally, the glowing yellow stone block is activated the same way as its twin, but it presents a super shotgun instead. Also, near the blue skull key switch sits a BFG9000 with an energy cell pack in a niche that can only be reached by activating a hidden switch (see Secrets).

Both blue skull switches need to be activated to drop the columns on both sides blocking access to the next section of the map (although it's only necessary to activate one to advance through it). The next section is a commons area infested with mancubi, imps, cacodemons, and pain elementals. Using a high tier weapon like the BFG9000 will neutralize the hoard pretty easily. The commons area is a precursor to the inner sanctum before the inner keep. Upon entering the sanctum, a hoard of lost souls will appear and attack. After dispatching them, go to the door at the back. You will find it to be locked, however this causes the switch that opens it to raise up from the balcony off to the left. Activate the switch, but proceed into the keep with caution due to the imps, baron, and sergeants lying in wait who are already aware of your presence.

Dispatch the aforementioned imps, baron, and sergeants, and also the spectres and barons in the descending stairwells off to the sides. Killing them will trigger the appearance of a soulsphere in the middle of the open space atop the empty pedestal, however it is a trap as picking it up triggers the appearence of cacodemons. Finish dispatching all sergeants and any straggling monsters and head into the deepest part of the keep by going through the lower section of the keep, up one of the elevators, and towards the final door that opens after a final wave of lost souls appear for you to take out before activing the switch that drops the teleporter you step on the end the map.

* The vertex count without the effect of node building is 1524.