MAP14: Fire Fighter is the fourteenth map in the DMP2013L.wad mapset of Doomworld Mega Project 2013. It was designed by SFoZ911 and uses the music track "Between Levels," originally composed by Robert Prince for Doom II. 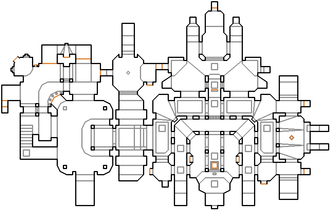 Map of Fire Fighter
Letters in italics refer to marked spots on the map. Sector numbers in boldface are secrets which count toward the end-of-level tally.

A multiplayer-only radiation shielding suit (Thing 105) in the northeast has no flags set for any of the three difficulty classes, so it does not actually appear in the level.

The deathmatch start (Thing 270) has no flags set for any of the skill levels either, but because of special handling in the engine, it functions normally in the level.

* The vertex count without the effect of node building is 1123.