MAP14: Flooded Library is the fourteenth map of Doom 2 the Way id Did. It was designed by James Paddock in the style of American McGee. The par time defined in the DEHACKED lump is 1:30. 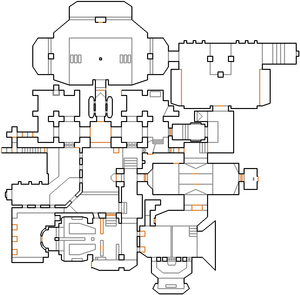 Map of Flooded Library
Letters in italics refer to marked spots on the map. Sector, thing, and linedef numbers in boldface are secrets which count toward the end-of-level tally.

There are three keys on the map, though the yellow one is optional since you can enter the library without opening the yellow bars and is used for unlocking the shortcut.

From the starting area (A) go forth to the outside area (B). In the corridor (C) walk upstairs and head left. Jump down to the grounds. Lower the platform by pressing the switch on it (you can also just press use on any side of it to lower). The second platform containing blue key will lower together with the first one. Take up the key.

Once you have got the blue key, lower the wooden platform at the north of the outside area (B). Enter the northern alcove while the platform is lowered. Press use on the button requiring the blue key. In the water area walk any staircase. Press the switch at the north. Several alcoves containing crowds of monsters will open. Use the eastern alcove to get to the second water area. Press the switch at the south. The platform blocking your way will lower as well as another platform behind you. It contains a crowd of monsters and a red keycard on the HMP and UV levels. Grab it once you kill the crowd. If you play on the easy skill levels go south to the room with cage. Grab the red key.

Once you got the red key. Escape by going through the cage room and dropping down. Use the pair of lifts in front of you and use the door. If you possess the yellow key, press the yellow switch for the shortcut. Otherwise, use the old way you have used earlier. Go upstairs into the corridor (C). Head left and open the red door. Press the switch to your left to build up the bridge. Walk on the bridge to the other side. Open the door and press the switch.

From the starting area leave to the outside area. Walk upstairs, and head south into the library (D). At the very south of the library press the switch to raise the bookcase. From this new bookcase jump over to the second one. Grab the yellow key.

This can be accessed through the southern library (D) but you cannot get to the south by walking on the bridge from there. In the water room before the exit door, drop down to the pit and head south. Use the lift. Press the button to your right. This will open all the blue bars. Walk on the bridge, enter the room and jump over to the other side. Grab the plasma gun and the ammo for it.

* The vertex count without the effect of node building is 970.