MAP14: Fortress of Catamarca is the fourteenth map of 1000 Line Community Project. It was designed by Diego Villarroel (DJV) and uses the music track "Night Bats" by Mark Klem, taken from Memento Mori. 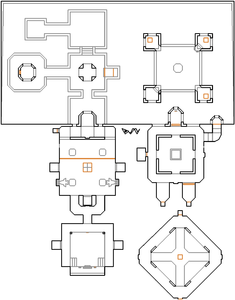 Map of Fortress of Catamarca
Letters in italics refer to marked spots on the map. Sector, thing, and linedef numbers in boldface are secrets which count toward the end-of-level tally.

Take the shotgun and box of shotgun shells then head forward to a square area with imps. Head up the south steps to a marble tower guarded by chaingunners then continue south to a doorway in the red brick wall ahead to reach a chaingun. Go left or right to enter a large hall with four caged Hell knights around the red skull key - the entrances to the hall will close as you walk past the first pair of cages, and taking the red key will open three closets around you containing demons and cacodemons. Head through either of the south doorways to a room containing spectres and one or two mancubi, then go round the outside of the cage and go down the steps to find armor in front of a skull switch.

Press the skull switch to open the path back to the marble tower then return to that location, killing any imps that impede your progress. Back at the marble tower, head west to a red tower containing another skull switch and press it to reveal a second switch, then press that switch to lower a red skull barrier by the marble tower. Go back to that tower and kil the imps that teleport in then step on the teleporter behind the skull barrier - you will enter the fortification in front of you, which contains a super shotgun along with a baron of Hell (and knights on Hurt Me Plenty skill level or higher). Enter the teleporter in the south-east corner to enter an enclosed red room containing a supercharge guarded by arachnotrons, then go up the steps in the north-east corner of the room to find some health bonuses leading to the yellow skull key.

Go back to the supercharge room and kill any cacodemons that have teleported in, then open the large door in the south-east corner (requiring the yellow key) and step on the teleporter behind it to reach a diamond-shaped chamber with imps and demons. Head due south over a cross-shaped bridge, past a pillar holding the blue key, to find a skull switch behind a chaingun and press it to lower the pillar you just passed. Take the blue key and kill the revenants that teleport in, then step in the north teleporter to return to the supercharge room and open the north door (requiring the blue key) to reach another skull switch. Press this switch then use the teleporter in the south-west corner of the room to return to the gray fortification where an arch-vile has appeared. After killing it, step on the white teleporter in the north-east corner to finish the level.

Look behind the red tower with the red key switch to find a rocket launcher.